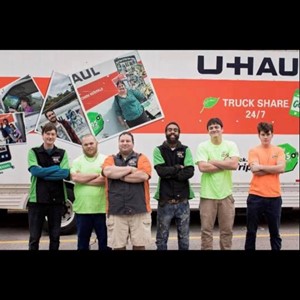 Labor only service where we come in and load or unload your truck, trailer, or pod.

They were about 30 minutes late - called just before the appointment time to let me know they were held up in traffic. They came prepared and worked hard, and were very careful with my belongings. I would definitely use them again.

The young men were not only courteous but came with the right equipment to move even our heaviest pieces. They were on time and kept a steady pace while unloading our POD.

From the 3 workers, only one really worked hard. They were slow, took time in the truck laughing and joking instead of working.At one time, I had to remind them that they were working in a time frame. I felt that they were milking the clock. Only after I complained the other two workers start working steady. I was very unhappy with the service.

Mover's response:
Slow? Sir these 3 men unloaded your 24’ truck in 4 hrs. Scale for an unload Of a 26’ truck is 5-6 hrs for a 2 man crew this means they were well within timeframe. This crew gets raving reviews so I don’t know what the issue was here. I will not apologize for their behavior of having fun WHILE working and trying to enjoy their job but with the standard review being 5 stars with this crew something has got to be missing.
- The Moving Boys Labor Service

On time , clean, courteous, careful. I plan to hire them again !!

Super helpful, very polite and conscientious young men who clearly know what they are doing. Brought tools that were very handy. Made my move so easy, would definitely recommend them!

Service was speedy, but they loaded the truck wrong. My wife was supervising the inside of the house to make sure they took the right things, and she was alone, so she couldn’t see the truck getting loaded. They loaded all the boxes first and then furniture last, which is the opposite of how you’re supposed to load. We didn’t even leave the parking lot before we heard the boxes crash down. We opened up the truck bed and a lamp was broken, our dining chairs were scuffed from the beds falling on them, and our entertainment center shelves fell off and was also scuffed. They stored the tables sideways instead of right-side up or flat-side down, which we had to rearrange. If you book them, make sure 1 person supervises they truck and the other supervises the home moving.

Mover's response:
This truck had an overhang to which the crew has been instructed fill that portion with boxes first. It sounds like the client knows how to move so why hire professionals??? No rope nor straps were provided by the client and the Client is WHO signs off that the crew is cleared to leave. If unhappy why sign and tell them theyre free to leave? As for the way things were loaded, according to the crew there wasn’t enough furniture to fill the small truck so they did all they couldn’t to use up space to make everything right and tight.
- The Moving Boys Labor Service

very professional and careful with all of our treasures- I would recommend them to anyone needed unloading help.

We asked for four guys to onload a 28' trailer. Only three showed up. They were on time and would say they were prepared, had moving straps. They needed some direction, my husband stepped in and organized things. Respectful of our items but not great at placement so you could still walk through the area. Overall they were pretty good.

Originally scheduled 3 helpers, but only 2 showed up. In the end it took longer to load, but cost a bit less $$. The only issue was that they didn't really plan out the truck loading very well and at the end there was extra space in the truck, and more stuff to load. A number of lighter items had to just be tossed in to fill in the gaps. Overall they were OK, but could have been better.