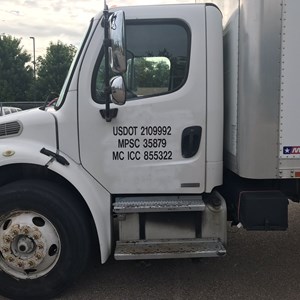 At A Daystar Moving & Hauling we are available 24 hrs a day, 7 days a week. We have multiple trucks for rental, or we can pack and unpack your rented truck. We provide dollies & 4 wheel dollies. Have the tools necessary to disassemble & reassemble any furniture that may need it. We call to confirm your move date, time & job description. The moving team has 10 yrs experience, with licensed drivers who will properly wrap & pad all furniture as it goes into our or your rental truck.

We have booked for two helpers and three showed up. When I asked why, the oldest of them said he was their supervisor. The other two were in their 50's, one of them was a well mannered person and second one totally rude. He smashed furniture against the wall leading to its destruction. They were huffing and puffing and needed to rest every 5 minutes. I felt they were physically not suitable for this job. Even though they did a crappy job, I tipped them ten bucks as I pitied their physical condition. I would strongly recommend against hiring them!

The 3 men that came did an excellent job on everything however they did scratch the wood floor removing the treadmill from the basement. Their price was fair and they didn't spend any time goofing off. Worked very hard from beginning end. I would hire them again.

I scheduled last minute and this company was able to accommodate my job. They were timely and did the job well.

Allan, Brandon, and Geno showed up on time. They were extremely efficient at unloading the contents of the moving truck into my home.

A Daystar Moving Co. arrived on time, worked hard, and were very respectful of my property (they even took apart a table in order to fit it into my basement). I would recommend them and use them again myself.

They were very quick and thoughtful with how they handled our things. They were also very pleasant and never complained. They got the job done right and were very efficient. We would call them again if we needed them!

Excellent movers. Showed up within the allotted time window and were very communicative throughout. Careful and professional. They were prepared for the move and worked hard the whole time.

They were on time. They worked hard. Very pleasant and respectful. Took great care of our “stuff”

They were on time and prepared for the job. They worked hard but complained the whole time. they were not respectful of the property, They broke two tables. I would never use them again.

When I contacted Hire A Helper for two laborers for two hours they gave me an arrival timeframe of 9AM-12PM. When I called A Daystar Moving Co to confirm, the gentleman who answered the phone asked me what time I would like them to be there. I said I would like them there at 10AM. The man said that was good. The helpers showed up at 1:30 PM. They phoned me three times telling me they got lost and it would be 10 minutes before they would get there. I texted "Help" to Hire A Helper, a representative called me within minutes. She was very helpful. She said that she would give me 10% off the bill for being late. I was not given the percentage off on my final bill. When the helpers did arrive, they did work and got the job done. I thanked both men for their two hours of work and tipped them each $20 in spite of the late arrival. When all was said and done, one helper asked me if he could borrow $5 just as I was getting in my vehicle. I declined. I would use Hire A Helper again, as it is a smart concept. I would not use A Daystar Moving Co.

Mover's response:
As owner I was not aware that one of my men asked the customer for a loan. I would like to receive a description of said worker from customer.
- A Daystar Moving Co.

Will receive an immediate acknowledgement and acceptance of job

Up to 50 miles local will move office furniture

Teach the necessity of shrink wrapping ,padding and tying down items securely during movement of truck