From moving to Florida or staying in Maine, from hopping apartments or loving Scottsdale, Arizona, 2019 brought us all kinds of strange (and some not so surprising) moving trends.

For the 2020 Migration report, HireAHelper analyzed over 25,000 moves that were booked on HireAHelper.com, surveyed our demographics, and cross-referenced US Census data. Here's where people moved in 2019.

We looked at the origins and destinations of moves to find out which states and cities attracted the most new residents, as well as which had more people move out of them versus into them. This shed light on which places were the most attractive to people moving across the United States.

We also wanted to get a better understanding of what it's like being inside a moving truck, so we explored the distance and timings of moves by measuring how far (and when) Americans were likely to move in 2019.

All in all, HireAHelper is excited to share this roadmap of where people may be moving in America in 2020.

Where We Went (Spoiler: Florida) and Where We Left 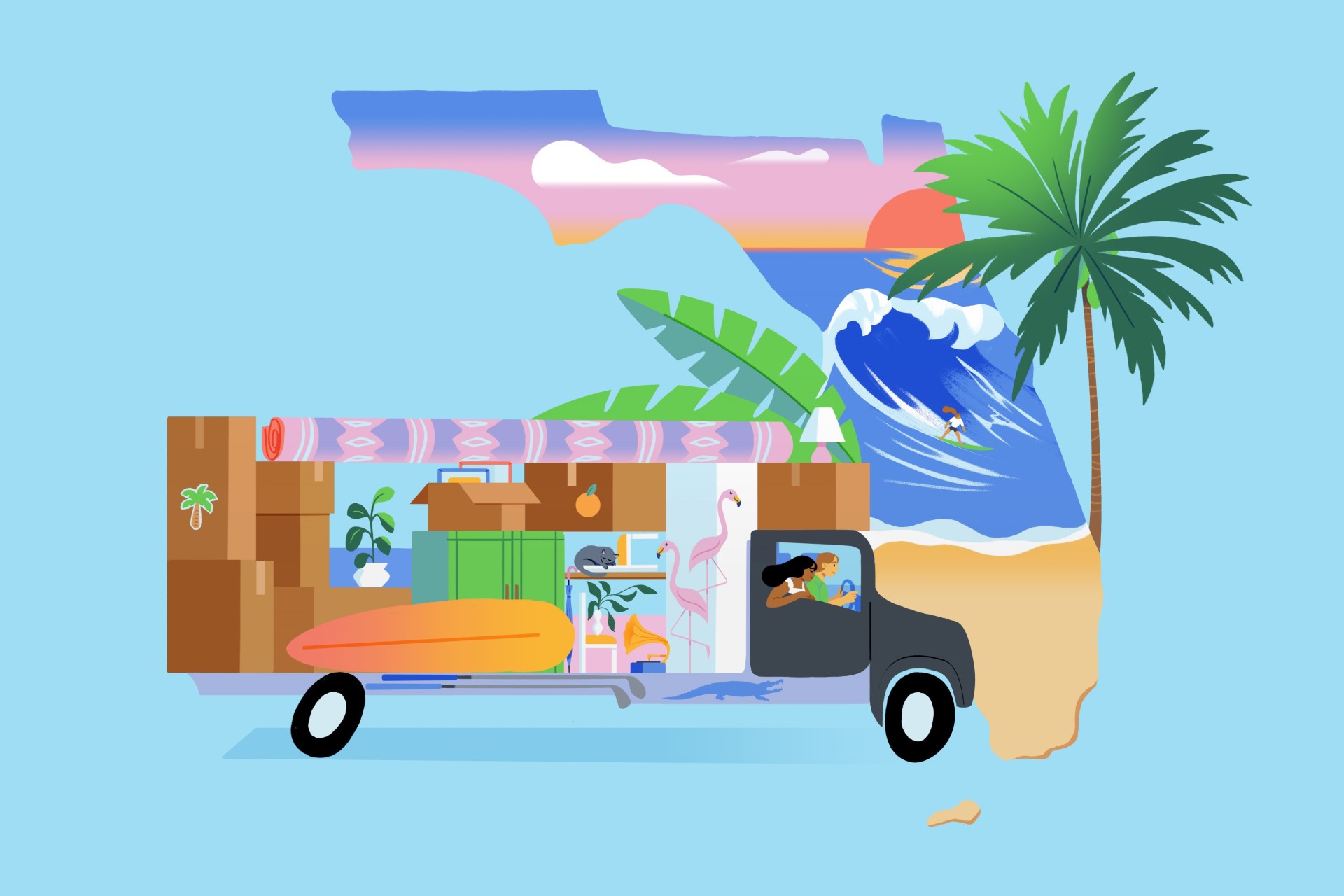 Whether in pursuit of warm weather, peaceful retirement, or that famous all-year-round sunshine, a vast number of Americans moved to Florida in 2019. More than any other state!

If it's possible to sum up when people in the United States moved in 2019 in one short sentence, it would go something like, 'On a Saturday in the summer'.

In terms of sheer popularity, however, Florida is in a league of its own, being the top out-of-state destination in 22 states of the US. California was the biggest draw for six states, followed by Texas and Virginia - in four states. In three states, the most out-of-state moves went to Arizona.

We've packed these insights into a handy interactive map. Check above to see the top destinations for people moving out of your state.

Stuffed Potato: Which States Gained and Lost The Most Residents Due to Moving?

Which states had the biggest net gains and losses of residents?

Florida was indeed the top destination, but like all major destinations, it lost many residents as well. According to our net data, states like Idaho, New Mexico, and Maine all registered at least 35% more people moving into them compared to people leaving them. Close behind are Arizona and South Dakota, where net gains were at roughly 25%.

On the opposite side of the spectrum is West Virginia followed by, curiously enough, some of the wealthiest states in the country: New York (-18%), Connecticut (-18%), and Illinois, California and New Jersey (all at -17%).

So what's up with that? Dr. Wendy Parson, a PhD from the University of California San Diego and Sociologist at Varsity Tutors, suggests that people shifting to Florida or the Carolinas from California or the Tri-state area might be following the "snowbird" patterns of their elders. In other words, they want to set-up a house where their parents retired years ago.

Americans seem to be turning towards smaller cities when seeking out a new place to live.

One way to think of it is as people live longer, their grown children will often question their lifestyle (e.g., high taxes, climate, overcrowding) and weigh the merits of early retirement. These empty-nesters make choices to scale down, be closer to their ageing parents or college-age children who have already relocated.

We've packed these insights into a handy interactive map. Check above to see how your state fared.

The Wanderers of Wyoming and The Homebodies of New Hampshire

The US Census Bureau reports that most Americans who move don't actually cross state lines. But if you do, according to our data, there are states where you're a lot more likely to leave than others.

States with the highest share of out-of-state "wanderers" are:

Conversely, people in the following states were overwhelmingly more likely to keep their moves within the same state. It appears many places often associated with remote and beautiful countryside appear to have a lot of homebodies.

South by Southwest? Cities People Moved to and From the Most in 2019 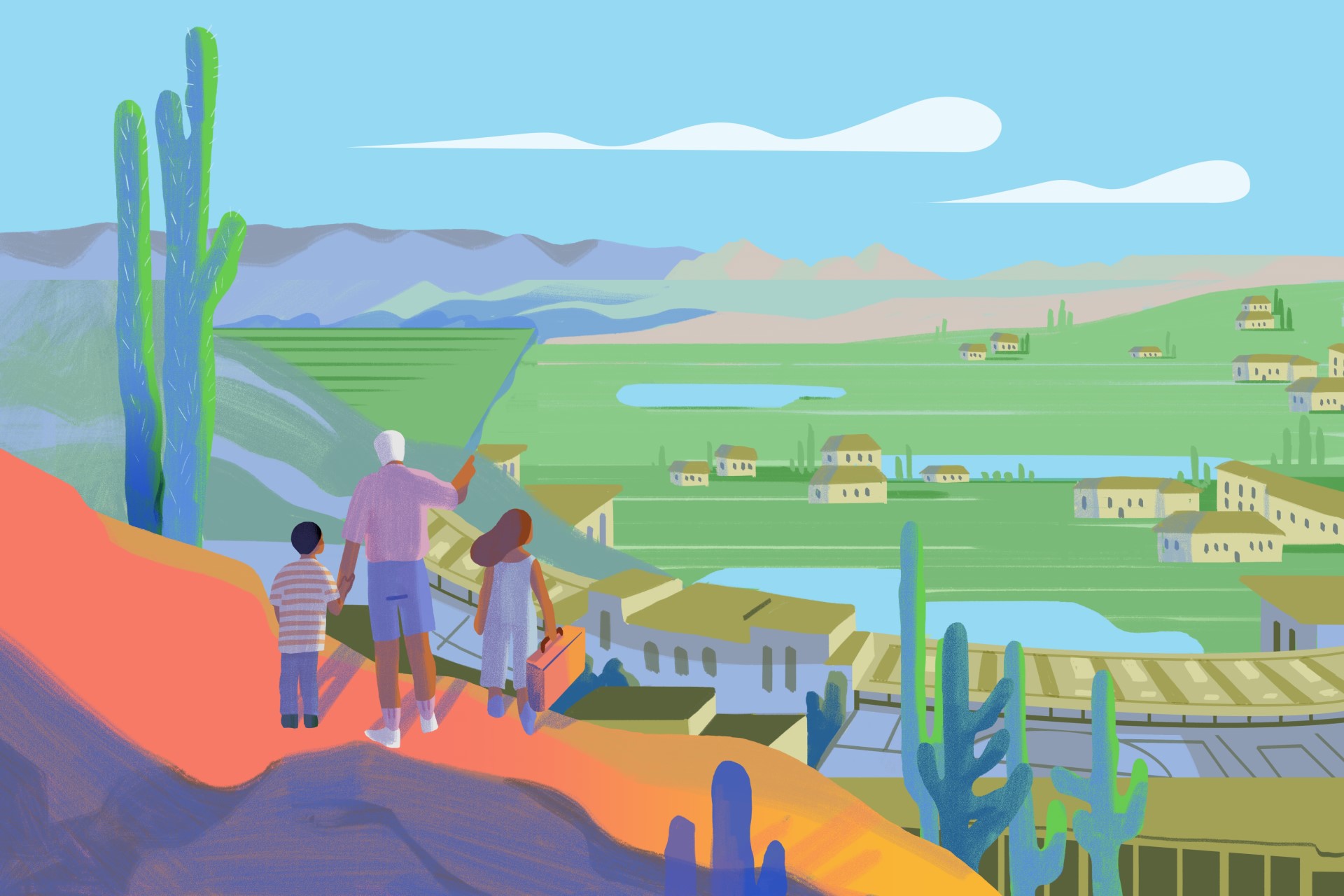 On the city level, a different pattern emerges. It's actually the cities that are often romanticized in movies and music and that are often associated with financial success which all had more people moving out of them than into them!

Why? Whether due to the high cost of living, lofty tax rates, or overpopulation, New York City, San Francisco, Chicago, and Los Angeles all find themselves having lost more residents than they gained in 2019.

Smaller cities, often those in southern states, saw big net gains. Mesa and Scottsdale in Arizona and Sarasota in Florida had 50% more people moving in than moving out. Gains.

One explanation for patterns seen in the flows between cities, Parson suggests, is that many former "seekers" - people who moved to cities that were glamorised by films or the desire to strike it big - are often disillusioned and return to places where new opportunity lands them, whether it be a new partner (maybe another disenchanted seeker) or a new job.

The prevailing belief that raising children in a small town is a more desirable, safer alternative to larger cities also plays a part. Affordable, suitable housing and better lifestyles for families exist in smaller towns which have bigger homes, outdoor activities for kids and perceived better schools.

The stress of remaining in a city where one does not have roots, obligations of hometown family members, or being a newly single parent who needs help with child care might send seekers back to their small towns... or to new ones where they can remain at a more familiar pace.

Small Cities and Big Towns: The Most Attractive Cities In Each State

Largely driven away from iconic skylines, burgeoning food scenes, and more importantly, pricey housing developments, Americans seem to be turning towards smaller cities when seeking out a new place to live.

Whereas the cities that achieved the highest net gains in some states are still the biggest cities inside those states (e.g., Alabama, Colorado, Oregon), an interesting trend emerged in some states with a dominant biggest city.

According to the US Census Bureau...the most common reason to move in 2019 was for a new or better home.

In Texas, for example, the vibrant Austin beat out both Dallas and Houston. In Illinois, the humble Champaign - unlike Chicago - had those moving in outnumbering those moving out. Albany surpassed New York City in the Empire State, while Scottsdale outshone Phoenix in Arizona. Sarasota also beat out Miami in Florida for good measure.

Here are the most attractive cities in each of the states.

People are leaving New York City, arriving in Durham, North Carolina, and relocating within Oregon. But what exactly has driven Americans in their moves in 2019?

According to the US Census Bureau, namely their Geographic Mobility series, the most common reason to move in 2019 was for a new or better home. A solid 17% of all people moving reported this. Roughly 1 in 8 (12%) of Americans moved for a new job, while an additional 11% moved to establish their own households. 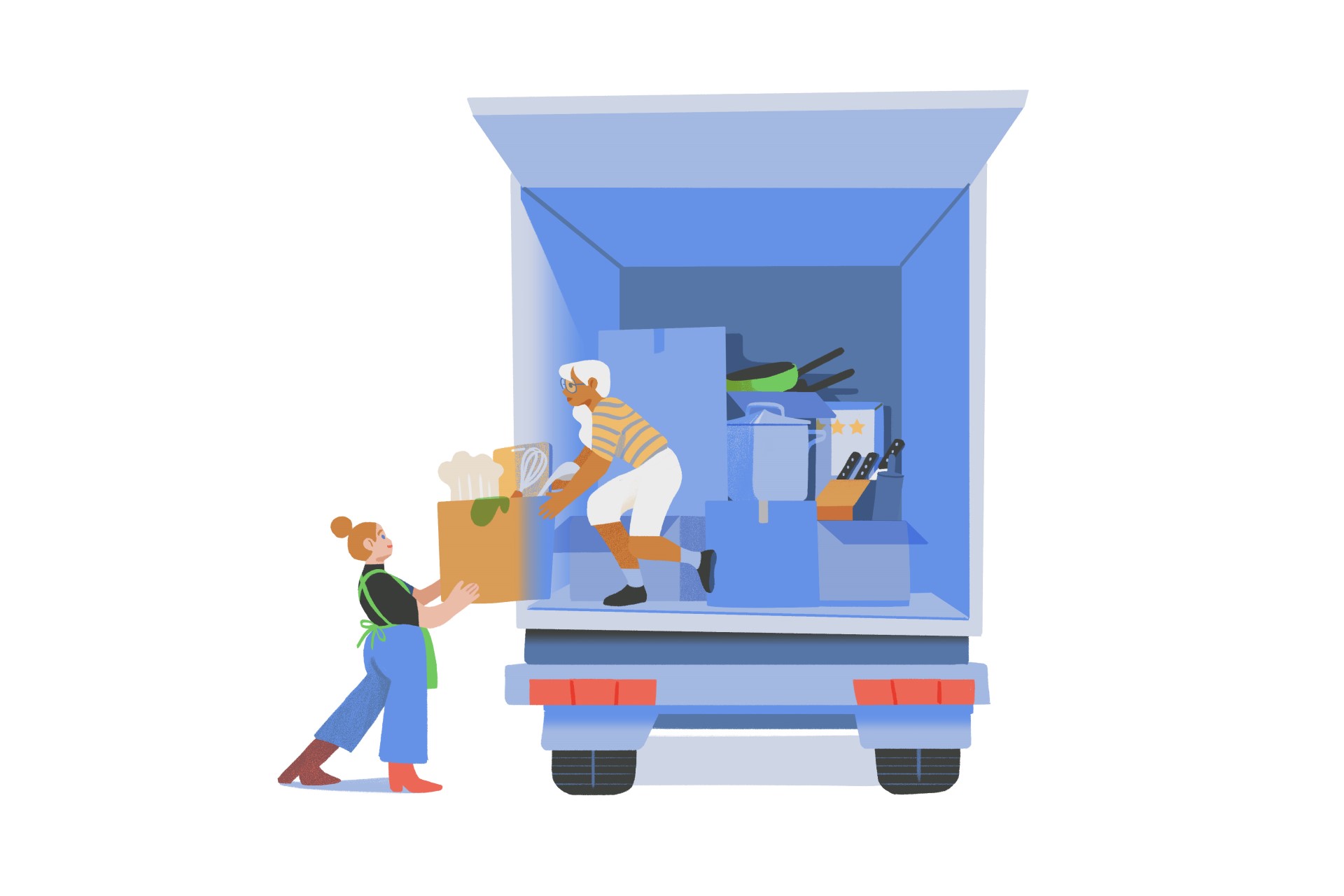 While a few of the top 10 reasons for moving are veiled by the "other" categorization, it's worth pointing out that 6.7% of all people moving in America moved specifically for cheaper housing. A similar proportion - 6.3% - made a move as a result of becoming homeowners.

A recent study of motivations for moving published by Porch - a home services platform - suggests that employment-related reasons were three times more likely to be a factor for people moving out-of-state. As many as 47% of out-of-state moves were motivated by work, compared to 16% of moves within state, where work played a part.

Housing reasons, on the contrary, had a smaller role to play in moves across state lines. While 47% of moves within-state were housing-related, it was a factor in only 14% of moves into a different state.

The Long and The Short of It: How Far Americans Moved in 2019

Given the majority of moves in the United States were rather local, the average distance of the move booked through HireAHelper came out to be 27.7 miles. In fact, 50% of all moves completed through our platform were only within 21 miles of their origin. 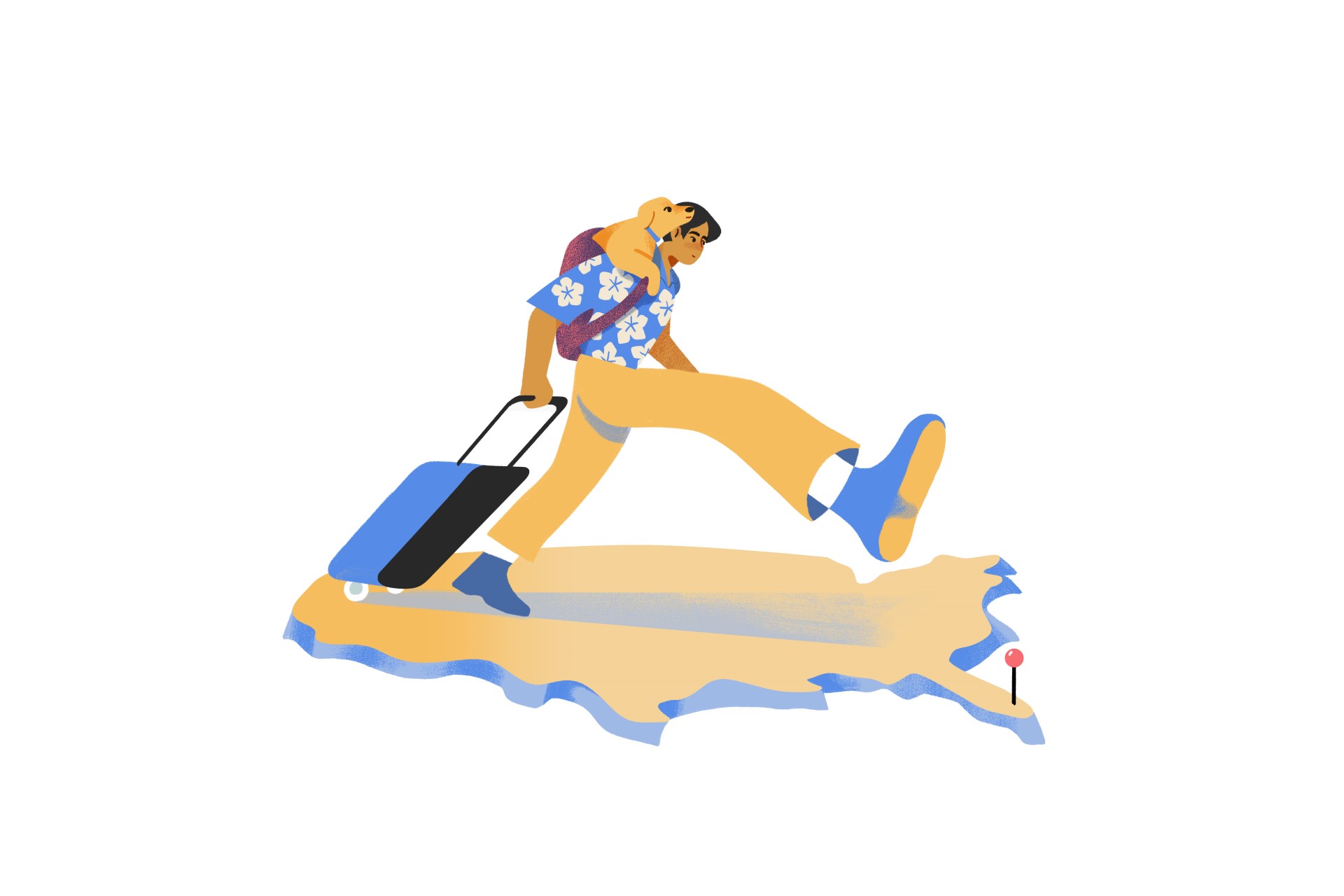 While the average move distance in most states was reasonably close to this average, those moving home Montana, Wyoming, and Vermont faced the longest transfers. Typical moves originating in the first two of those states were over 50 miles long!

Which Americans moved the shortest distances? On the opposite side of the scale, Nebraska, Nevada, and Utah rounded off the states with the shortest moves, averaging less than 20 miles.

On a Summer Weekend: What Time Do People Most Often Move?

If it's possible to sum up when people in the United States moved homes in 2019 in one short sentence, it would go something like, "On a Saturday in the summer".

Those who rent are four times more likely to move than homeowners.

Not only was Saturday a runaway winner among days of the week, with more than 1 in 5 (21%) of moves taking place on that day, but it was the most popular moving day in 40 states! Exceptions to the rule are states like Iowa, Kentucky, Louisiana and Nevada, where more people preferred to get a jump on the weekend by moving on a Friday.

Just as much as Americans like to move on the weekend, most of us prefer to move in the summer. Whether due to better weather, more free time, or longer daylight hours, more than 1 in 3 moves in 2019 took place in June, July, or August.

Take this as a lesson: book your movers early.

Despite January and early months of the year having a strong association with changes and new beginnings, this hardly translates to moving into new homes. In fact, less than 5% of moves took place in January, according to our data. Holiday-heavy December, unsurprisingly, was the least popular month to move home.

The only states where the most common month to move home was not in the summer were Iowa (September), Nebraska (October), Mississippi and West Virginia (both May).

Who's Your New Neighbor? The Demographics of Americans Moving Home

To better understand the nature of moves captured in our data, we surveyed 1,700 HireAHelper users who booked a move in the last 12 months.

The youngest users turned out to be the most mobile, as 58% of "Gen Z" customers (ages 18-24) moved at least once a year over the span of the last five years.

Only 29% of Millennials (ages 25-35) surveyed had the same mobility rates, 68% of which completed only one or two moves since 2015! (This doesn't necessarily mean they didn't move, simply that it's possibly younger people haven't caught on to the wonders of affordable movers yet.)

Consistent with the Census data, people in relationships (defined as "not married, but living together") moved with movers the most frequently—31% of them moved at least once in the last five years, likely starting new jobs or looking for better homes.

In terms of property ownership, those who rent are four times more likely to move than homeowners. Maybe that is not surprising, except to know just how hard renting can be on people. (However, of homeowners who did move, 20% of them moved at least once a year!)

HireAHelper's Migration Study analyzed moving data on more than 25,000 moves in the U.S., booked through our online platform in 2019, supplemented with 2018 U.S. Census Bureau population estimates. Two states, Alaska and Hawaii, were excluded from rankings due to a lack of sufficiently representative move data.

Unless otherwise stated, all percentages, breakdowns, and summary statistics were derived from the data captured by HireAHelper.com. Additional data sources include the US Census Bureau Geographic Mobility series, and a HireAHelper users survey carried out in January 2020.

Net gains or losses in people moving in/out for both states and cities were calculated as the ratio of: