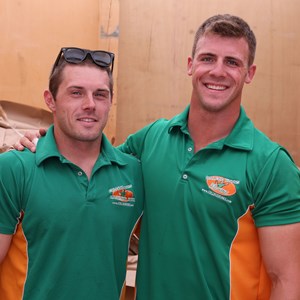 Team arrived about 30 minutes late... however, they did keep in contact, so no issues. They actually sent an additional person to assist. I ordered two movers and three showed up, which was awesome. They did not charge me for the additional help. I scheduled a three hour job and they knocked it out in about 1:45. All three movers were courteous, professional, and they definitely worked their tails off- literally running up and down three flights of stairs. I would highly recommend College Hunks!

The team did a fantastic job, they arrived on time and loaded the entire house within the estimated time. We have already contacted them for my girlfriend's move in a few weeks!!

Great crew. Michael was terrific and Chris is exceptionally helpful. will definitely use your service again and have already referred 2 friends to you. I've done time and they worked hard. They were all very respectful and very cooperative and setting up the bed and moving the furniture. I'm giving you the highest rating--no complaints!

They were everything I was expecting and more, not only were they on time, prepared, worked hard, respectful of my antiques & other treasures, they were very friendly and fun to be around. I would absolutely use them again and recommend them to my family and friends. Please share with them how much I appreciate their help!

These college guys were professional, friendly and respectful. I enjoyed their company and they were hard workers non-stop. I would use them again and recommend them to anyone.

"every job is a self-portrait of the person who did it, autograph your works with excellence." That is what these guys did they autographed there work. The customer called me up and said you need to container hiring these guys they know what they were doing. One thing I will say DON'T PASS THEM UP, THEY ARE GOOD!

Hire-A-Helper called to confirm time & location. The morning they called again which I appreciated. Guys were great very respectful took care in unloading my container. Do on time. No issues moving furniture to different spot. They asked several time no problem moving things around. Went over insurance and billing they made sure I knew my options. Over all great service. College Hunks will use again.

Both guys did a great job and I would use your company again. They were actually early and very careful of our possessions.

Great workers. Did an excellent job. Loaded two 16' containers in just under 4 hours. Yes, I would use them again if needed. Highly recommended.