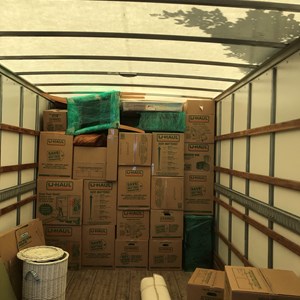 All Purpose Movers is a family owned and operated business located in Seattle, WA. Our goal is 100% customer satisfaction, we guarantee top of the line services and experienced movers on every job. We have years of experience in the moving industry and the vision to grow into one of Seattle's #1 moving companies. We offer uniformed crews and affordable prices!! WE ARE A LICENSED AND INSURED BUSINESS!! Fast - Quality - Moving

On time, courteous, careful with our furniture moving and assembling. Genuinely helpful and competent.

Roosevelt called to let me know when he and Dustin would arrive. They were early, which meant we got started early! They looked at the apartment and started moving boxes immediately. They worked quickly and steadily from the time they arrived to the time they left. Roosevelt is a master at loading the truck and both he and Dustin handled all my sister's boxes and furniture carefully. It turned out to be a bigger job than I had expected and they kept at it until we were done, which included a second trip to the apartment to get the items that still wouldn't fit into the first load. (I had originally scheduled 1 16' truck with Budget, but when they cancelled because they didn't have enough trucks for 20 of us, I called UHaul and got a 15' truck.) If I could give them more than 5 stars, I'd give them 10! I would definitely use Roosevelt and Dustin again, and would recommend them to anyone! Kind, efficient, pleasant to deal with. Yup, they get my recommendation.

All Purpose Movers were great! They showed up within their appointed time window and called the night before to confirm when they would arrive. Roosevelt was the leader with two helpers. Roosevelt was a very hard worker and was creative in the move. Our son had a very long sectional sofa that could not be carried up the stairs due to its length. Between Roosevelt, his 2 helpers and my son, they figured out a way to get the sofa up to the third floor (the apartment did not have elevators!) I am happy to give APM a great review and I would definitely hire them again!

Roosevelt and Dillon (?) were absolutely wonderful. They were on time and worked so hard moving furniture out of the u-haul into our cabin with its narrow stairs other obstacles. Would highly recommend them. We couldn't have done this without their help and it was worth every penny.

The two men who showed up did a wonderful job. I’d hire the again. A word of caution: we requested a 4 hour block of time and did not use the total amount of time. The two men recognized this as a short job when they arrived, figuring it for a two plus hour assignment yet did not clarify with us that we would be charged for 4. We all proceeded forward as a team to complete early yet when I called to clarify payment there was no adjustment of charges, no credit for a next with assignment. I was instructed to study the website. A word of caution: be clear how to reserve times. Spend the time upon reservation so you are not overcharged. $100/ hour is a big tip, esp when not known. Next time: we will look elsewhere.

Our 2nd time to have Roosevelt help us with a move. Diligent, considerate, hard-working. I highly recommend!

These guys were amazing! They got there ahead of schedule. It was a hot morning and they had steep stairs to climb. They kept checking in with us on how much time we had left and what we wanted them to move. They were so respectful and worked so hard! They packed the uhaul like a dream and it took us only an hour to unload. I would recommend them to anyone needing help moving.

they can expect us to be completely transparent with them in regards to their move. this include communications and showing up on time every time.

they can expect us to work hard and efficient not forgetting being carful as well.

Loading day, Have everything ready that’s going to be loaded into truck and put all personal belongings, where the movers can not mistake it to be apart of items being loaded. pets and small children should be put away to avoid any accident or tripping into. For unloading we'll appreciate it if the customer that's being unloaded to be available at all time letting the movers know where to put things until the unload is completed

when a customer is Satisfied.