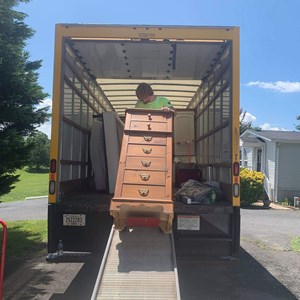 Looking for professional and friendly labor services that do it all then give us a call. We will treat you right and do what it takes to do the job right. We're ready to take on the challenge. So what are you waiting for book us today so we can get started doing what we love.

Willie and Brandon did a great job! They were super efficient and careful with my things, and were very kind as well. They were on time and worked hard to ensure my things and my old place and new place were take. Care of with no damage. I would highly recommend them. Thank you, Affordable Moving Labor, Inc.

They came at the arranged time and worked hard and were incredibly helpful moving and assembling a he furniture. Virginia Home Consulting

Two young men showed up prepared to work. They were friendly and loved my dog. I can’t speak highly enough of them. I made the stop at 4 PM. I gave them both a good tip because I don’t think this company pays them enough. Will use these guys again

Aaron and his team were friendly, efficient and helpful with moving my daughter into her apartment at college. I certainly would use Affordable Moving Labor, Inc. to handle my relocation needs in the future

The guys were late, but were very apologetic, and seemed like nice guys. Not a single thing was broken during our move, which is always nice. They were polite, and seemed respectful of handling our items. They arrived, and immediately got to work loding items. My only issue is they did a horrible job packing the truck, which caused us to leave quite a few items at the old house. I didn't realize it until I started unpacking the truck, and realized, wow, there was a ton of extra space just wasted because things weren't packed well. For example, unloading the truck, I get to a table that has nothing packed under it - while I left bags and boxes that all would have fit under that table. Very disappointing.

The company sent different men each time I had a pod to unload. All did a wonderful job. I would use them in the future and recommend them. All were on time, worked non stop and took care of all my property.

These guys were super flexible and agreed to arrive a bit later than planned due to some rain delays. They did a wonderful job moving large and bulky items. Nothing was damaged or broken. Our home has a lot of stairs, and these young men got winded after each load, which required a five to ten-minute break. There were times when they were in the truck for long stretches of time, which meant I had to pay for additional time. They (three guys) ended up taking four hours to unload a truck (with lots of help from my family) that took two (other) guys four hours to load. I hired them because of their lower price, but their speed ended up costing me what a more expensive and faster company would have charged. I wasn't in as big a hurry to unload as I was to load the truck, so I would hire them again to unload.

These guys were great! They arrived on time which means a lot to me,they were careful with my stuff and they were really fast.The work they did in the time they did it could not be beat!I would recommend them to everyone.

They were courteous, on time, and worked like crazy! It was a hot/humid day, but it didn't slow them down. They were great.

They were helpful and had a great additude.i had a problem during their time with us and they did their best by recommending a cost saving alternative and then doing their best to make it all work out.

A call back to confirm the info and discuss any questions they may have.

For us to do a good job and in a timely manner.

Customer should have there things packed and ready to go. So when we get there we can start the job.

Anywhere from local to long distance and also a couple of office moves.

We don't have to pay to go to the gym.

On the job site training because the best way for someone to learn a trade is hands on.