Incredible Movers has over 12 years experience, we pride ourselves in providing top of the line customer service. We guarantee polite and professional crew workers, fast and efficient moving along with live updates for exact arrival times. 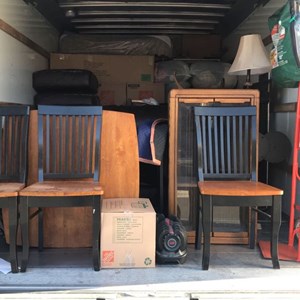 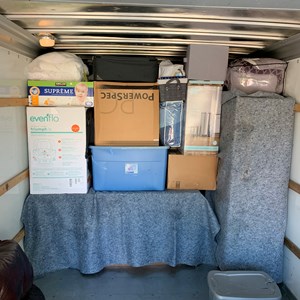 The crew was very polite and professional. They worked hard and efficiently. Would definitely hire them again for a move. Thank you!

These fellas are awesome!

Good job, got everything done fairly quick and professionally.

Highly recommend! They were on time and very hard working. They helped to unload my entire pod quickly and efficiently. Couldn't have done it without them! Will use again in the future, thanks Mike!

I almost never write online reviews and am taking the time to do so now, because - if you're shopping for a mover - you need to know about the phenomenal job they did. They also - more than any mover I've *ever* worked with --> deserve the recommend and your business. They did all of the "normal" things right. (They showed up a bit early, were well prepared, worked super hard, and were extremely respectful of my property, etc.) They were also incredibly strong, easily (and carefully) moving 2 or 3 super heavy items that about killed the movers on the other end of our move. They were also very skilled movers. Specifically, they packed the truck and tied down all of our items so well that we didn't have a single damaged piece on the other end. No question - you should *definitely* hire these guys. They were fantastic! -Robin

Mover's response:
Words can’t express how grateful I am to hear those words! We appreciate you for working with us and trusting us in moving your personal belongings! If you ever need us please give us a call!!
- Incredible Movers LLC

These guys were great. The owner came on short notice after another company was a no show. They were fast and courteous, and it was clear to me by the way they navigated large furniture through doorways that they knew exactly what they were doing. Hire this company!

Mover's response:
Thank you very much, we appreciate you giving us the opportunity to work with you a show our talents. If you ever need us again please don’t hesitate to call !
- Incredible Movers LLC

16 ft truck in 1 hr. Unload was good, but how they placed things wasnt 100%. Nothing bad just wrong location. Which is easily understood.

Michael and his brother Andre were fantastic! They were a last minute replacement for a couple of other companies that I had booked through HireAHelper but we were then informed that they couldn't help at the last minute. So it left me in a desperate position. I do appreciate HireA Helper for finding a last minute replacement, otherwise my wife and I would have had an impossible task to do. On the day they arrived, a previous company we had hired through HireA Helper named 2Guys4Hire, did so little that they left us in such a bad situation for the following day. The owner of 2guys 4 hire, and a helper, merely unloaded 80% of the items down the truck ramp and haphazardly spread the items in the garage for someone else I guess, to take into the house and up and down the steps to the appropriate rooms. In the same amount of time that workers for 2Guys4Hire on the previous day took to load the items into the trucks, which is much harder and time consuming, the owner of 2Guys4Hire and his helper merely unloaded most items into the garage at the bottom of the ramp. They were a waste of money as my wife and I could have done much of what they do and in less time! I can not tell you the vast difference between them and their last minute replacement: Incredible Moves. Mike and Andre not only loaded and unloaded quickly and efficiently the 2 truck loads they had but they placed all the items from the garage that 2Guys4Hire were too lazy to place. 2Guys4Hire has some guys working for him that are very good workers but I would highly recommend not allowing the owner to be one that is on your project! I am glad there are a number of good reviews for 2Guys4Hire, but I was completely taken back by what the owner and his helper did. I have been a businessman for over 35 years, and I know good workers when I see them and Mike and Andre were twice the men of the owner of 2Guys4Hire and his helper. Mike is a big strong guy and though his brother is quite a bit smaller, I have never seen such an amazing worker as Andre! That guy would do things that defy physics and his weight class. I wish home moving was a sport as these two guys would win the SuperBowl of moving hands down! I'm not one to write reviews but felt compelled to do so here as we experienced such a difference between companies. Keep up the good work Michael and Andre, you are good people and have that rare quality today of a good work ethic!

Worst movers ever! First they called me to ask (rather push) that our move take place earlier than the 1:00 time that was scheduled. Very insistent that we not wait and they he would call me when he was getting close. I didn't get that call until I was already on my way to the storage unit to be on time for the 1:00 appointment. Our next encounter with the movers was when they cut my sister off in traffic. She was driving a 26 foot truck. I was in front of her and all three vehicles were in danger. Then they got there (It wasn't 2 helpers. It was one helper and a 15 year old boy) and the man didn't like the way the truck was packed or the condition of the boxes. It was packed fine. The problem was entirely based on the condition of the boxes, which were badly packed and some falling apart. I wasn't happy about that either, but that is how my ex husband left my stuff. And I was really doing the best I could with what I had. They told me that they responsible for any damage. I agreed. I would have been happy if 75% of my stuff was in good condition when I unpacked it. Now, I'm thinking it's going to be less than 50%. Some of the boxes broke or fell over. This upset the man, so he would purposefully kick boxes (boxes clearly marked FRAGILE GLASSWARE, among others). I wish I could post pictures of my storage unit. Not filled to the top and so obviously the top layer of items were thrown in without care. They were rude. They were given waters by the storage owner and the man repaid that kindness by crushing the bottles and throwing them in the back of the truck. The 15 year old was perfectly polite, but could only do half the work, though he worked really hard. It's too bad he has such a horrible mentor.

Mover's response:
This customer was completely unsanitary, she had dead roaches , spiders , ant and live moths still in her trailer while we were unloading it . Her truck had dirt , and pesticides spilled all in the floor so my mover and I couldn't work , he wasn't 15 hahaha he was 19 years of age . As she said the customer hired previous movers from CRAIGS LIST who destroyed every single box she had inside her truck before I touched anything . If I can't stack on a box how do you expect us to stack and load you
- Incredible Movers LLC

Showed up late, but then forgave it because they busted their butt to get the job done! However then when we arrive at our destination, many of our things were seriously damaged because of how they were stacked. Tears in a new couch, holes in a sealed wedding dress box, broken pieces of exercise equipment, and almost all the hard work furniture pieces are scratched. Took longer to load as well because they did not have a dolly, and individually loaded every box.

Mover's response:
This customer ordered a budget truck 26ft long , we were late because this customer had us booked since last month and up until the day of the move I didn't hear back from her nor did I get a respond to a text message . They also provided no furniture pads only 5-6 blankets ! I used every strap and cord that they provided and stack and loaded everything accordingly! During the move I used her blankets she provided for her most important items , Beds, couches , entertainment centers etc. There we
- Incredible Movers LLC

All our customers can expect a call 30 minutes before the agreed start time, allowing all customers to either wake up and or get back home in time for us to start on time. When we arrive we will do a walkthrough to see everything that is going so we can load the truck accordingly and most importantly to make sure we don't leave anything behind. After we complete the job we will as the customer to do a walkthrough just to make sure everything is where it's suppose to be and nothing was damaged

Customer should always have clear walk ways and sanitary working conditions, all boxes that are being moved should be closed and taped properly.

We offer all local loading and unloading services. We also offer office moving, commercial moving, long distance moving anything you need done we are willing to do.

The workout you get after going up and down stairs all day.

Personal one on one lifting and handling of furniture, walking backwards up and down stairs along with turning corners and and proper stretching techniques