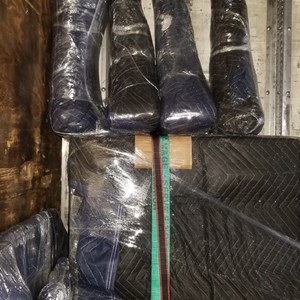 We are a Christian oriented business. We employee clean, professional, trustworthy employees. We have been in business for over 9 years with over 24 years experience and have excellent references. Let me know what services you need and we'll find a way to help you.

Dalton and Justin were incredible. They took a quick look around and got right to it. They used blankets and tied everything down. Great attitudes and superior work ethic! Use them!!

They did a great job and I’d recommend them to others...

Our movers were helpful and quick this past weekend in getting our containers unpacked and into our home. They did a fantastic job and even helped us move a 500lbs piece of furniture. I highly recommend this company to help you with your unpacking container needs.

The two men that arrived at my home for a scheduled move didn't arrive until 12 pm but was scheduled for 0900. When they arrived, it took the two men 2.5 hours in the master bedroom to move things out that were noticeable. I informed the lead that I wasn't satisfied with the performance and he attempted to move faster because he realizes the size of the home and very little was moved. He soon called someone else to assist him to continue to move my things and so I started moving my things because I was on a timeline. Long story short, I was very unhappy with the level of service for the move. I will say that he moved all my things in the house, but it took more than 12 hours with gaps and their timing to complete the job. The biggest problem that I've had wasn't professionalism but the fact that my furniture was damaged and the way this company handles damage claims is unheard of. I've tipped the guys pretty good and for that, I've had to come out of pocket for my damages because these guys will not communicate. These guys were not professional movers... No tee shirts, no forms to fill out, nothing. Call before you purchase their services and make sure that they are legit and have insurance to cover your broken items, or you will be paying out of pocket for all the damages for your own things as I have.

Hard working 2 guys. They were so polite and wonderful. They finish a head of time.

They were great. Did a nice job and were very patient with us deciding where to put the furniture. Terri

They did a fantastic job, we could not ask for better!

Bobby & Ryan are pleasant , efficient workers. They effectively packed and labeled the boxes, working at a steady pace and completed the task. Would recommend.

At the last minute we had two major changes in our moving arrangements and a wrench thrown into the works that I didn't think we could pull off. The first was that the buyers of our home wanted to close much earlier than we had planned, which was already very fast and days before Christmas. Second, we sold a lot of our furnishings as we were consolidating a vacation home and our current primary home into a slightly smaller new home that wasn't going to be built for almost year. Third, the people who were going to buy our very large master bedroom furniture decided at the very last minute that they didn't want it. We had no place to put all of this furniture so we wound up getting a PODS unit to pack and ship 700 miles away so that we could load, store, and then unload a year later. Now the problem was moving all of the furniture and boxes into the PODS unit in one day by myself. There would be no way to make that happen. Then I remembered that when I placed the order for the PODS unit, they sent me an email with suggestions for companies that supply you with help to move. My first thought was "Yeah, after 40 years in construction and hiring 'rent-a-bums', I'm going to hire a few part time drunks that were going to destroy the house and furniture at the same time. But I had no choice. I scanned through the ;list of companies available in my area. There were three but none right in Charlotte. They all said they served the Charlotte area but none directly in Charlotte. After reading the reviews I took my chances on a company called "A Christian Touch." I booked them for several hours and crossed my fingers. Early the night before a gentleman named Bobby called to confirm that we would need him and his helper between 8 and 9 the following morning. I said yes and he said he would be there as close to 8 as possible. Of course the next morning it was raining and the traffic was so bad that I wasn't sure that I would make it my house by 8 myself. At about 7:45 Bobby called to let me know that he was on his way but he would be late as the traffic on I-77 was really backed up and hardly moving. Knowing that I didn't expect I-485 to be much better. I asked him where he was coming from and he told me the north end of Statesville. That's about 70 miles from my house. OK. Whatever. Being I was also stuck in traffic in the rain, I got it. At least he called and didn't leave me wondering and panicking. They arrived at 9:00. They immediately went to work wrapping the furniture with the moving quilts I provided. They moved every bit of furniture carefully and didn't damage or scratch one single thing in the house. It was raining so Bobby rigged up a lean-to from the house to the PODS unit out of some plastic sheeting that I had to protect the furniture from getting rained on. He neatly placed every bit of furniture, boxes, picture frames, mattresses in such a way that nothing would shift in the move and that everything would fit. They filled that PODS unit solid all the way to the back door. On top of which they did it in record time. These guys were work horses. I was beyond impressed. If you knew me, you would realize that that statement does not leave my mouth with ease. I am impressed by nothing. I would use these guys again without ever giving it a second thought. If I could I would rate them with 10 stars instead of 5. If you are contemplating using a company of labor to assist you in your move. Do not do that without considering hiring these guys. You will not be disappointed. Don't forget to tip them. They very well deserve it.

Our two helpers/movers were on time and did a great job unloading the moving truck. They worked diligently and were insured that we were satisfied with where everything was put.