-Here at Above & Beyond we offer first class service at an unbeatable price, if you book anybody else your paying too much! -Come see what makes us one of the best moving companies in the Carolinas and Central Florida! All of our men and women are experienced and professional, and come highly reviewed. We really do go Above and Beyond to guarantee customer satisfaction. **Now offering move-in/move-out cleaning services 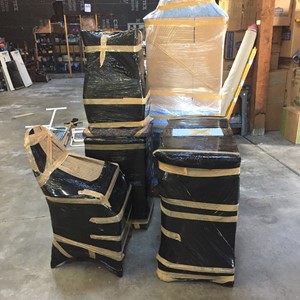 This company contacted me on the same day regarding their cancellation. Then did not find anyone until the following day. Thats not acceptable. I would not refer this company at all.

The movers were great! We had to reschedule our original date, which we did with them without a problem. They did arrive a little late, but we understand things happen. They got to work as soon as they arrived, unloaded the truck, assembled our furniture, and carried large items upstairs without damaging anything. Everything was done in under two hours. Both workers were friendly and polite. I would definitely recommend them!

They were 3 hours late to the job. They were not good about picking up phone calls. That morning they would say they were 15 minutes away and then 45 minutes would go by. I always had to call them to get an update. We were waiting outside in the heat and expecting them multiple times. We ended up starting to unpack ourselves. At one point I was on the phone with hireahelper trying to cancel because again they had said they were close and 45 minutes went by and they were not picking up their phone. We had the kids occupied in the morning, but because they were 3 hours late for a 3 hour job our little kids were there. When they finally came they worked hard and completed the job, but because of the inconvenience, stress, and poor communication I would not recommend!

I’ve had these guys twice, and hope to use them again soon. They were great! I didn’t have to do a thing. I just showed them what not to pack and load, and they did the rest. Wonderful service, Great guys. Highly recommended.

They arrived 2 hours past the scheduled time due to previous job taking longer than expected. However, they kept me updated as to what was happening and when I could expect their arrival. They worked efficiently and took great care of my items and was careful not to damage the home.

Raymond and Dustin were fantastic! They were professional and courteous to my girlfriend and I. They are pet friendly and didn't mind my dog getting in the way as much as i tried to keep him away. They were a bit late due to circumstances beyond their control. They did their best to keep me in contact with an adjusted timeline. They worked very hard and non-stop. They were able to move a 2 bedroom apartment within two hours.

Hands down! My helpers did an awesome job. I will recommend them any day. They arrived on time and went straight to work, putting everything in perspective within the allotted time. Very respectful and professional. Thank you for the awesome job!

My storage containers were available the day before I had scheduled the guys who were going to help me unload. They very graciously rescheduled me and did a spectacular job. Both young men were very polite, very professional and very patient with an old couple who didn't always know where they wanted things placed. They seemed to be very experienced at moving heavy objects and were very careful not to damage walls or floors. I would definitely recommend them and would use them again if I ever have to move again.

Very helpful team. Hard workers and very polite guys. I hope not have to use this type of service again, but would certainly use this team if necessary! Absolutely recommended!

A phone call within 24 hours to confirm all details of their move, and also tips to help improve their move.

Men show up in uniform, on time with all the tools necessary for the job!

Try not to clutter walkways if possible.

Local, long distance, special events, and office moves. Our guys all have a minimum of five years experience in the moving industry.

Helping people do something they may or may not be able to do themselves!

Two weeks of training in all aspects of moving.

Above & Beyond Movers Moving Photos

How all furniture is wrapped prior to moving.