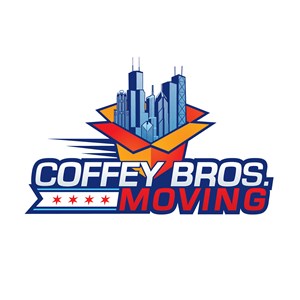 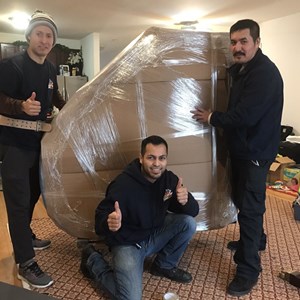 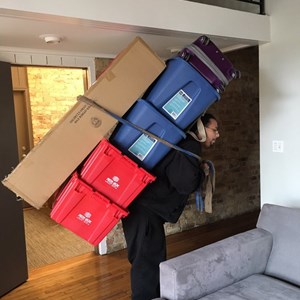 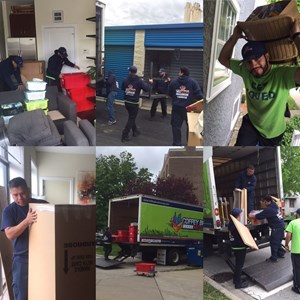 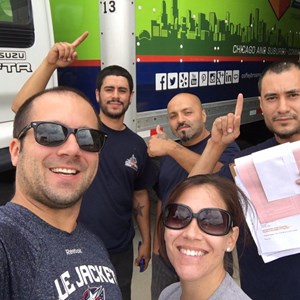 It’s very hard for me to provide a good review when I feel I was taken advantage of. Don’t get me wrong the movers Q, Leonard and Lamont were very professional, worked swiftly and handled my property and possessions with care. My negative experience came with the added charges. I paid for 4hrs PLUS .75 of travel time. The job started at 9:40am they finished at 2:20. I was charged for an additional 40min plus $75 for the use of there tape and blankets. After packing an moving and dealing with buying a home during a pandemic no one has the energy to fight over the bill. Sadly one of the movers forgot there phone and I had to deal with trying to get it to them - because they were afraid to turn around for fear of them being charged by the company. Don’t get me wrong I’m very pleased to have my items in piece and my property not destroyed - however I refuse to give five stars when as I mentioned I felt taking advantage of.

the guys were completely unfamiliar with the paperworks. they parked in a wrong spot and did not inform us where they were. they were not able to pick up the phone while we were looking for them. they were okay with the moving itself, but they did go over 2 hrs and we had to pay extra for it. we think this can totally be avoided had the guys been more familiar with their job. The company charged extra for moving the TV, which was not previously disclosed on Hire A Helper. they also charge you for all supplies the movers use, so you want to keep an eye on that. we ended up paying ~$130 more on top of what we have already paid online. It's not a good deal as the website is making it to look like, but they do get the job done.

Coffey Bros were super helpful with the logistics and coordinating with our building so that we'd be able to move in on time. Q and X who moved us in were super efficient, professional, and just plain nice! Would highly recommend!

This was a total RIP OFF. I did not know you had to go through a 2nd party. I paid toooooo much of money for this move. I will never use hire a helper again. I thought this was ALL the same company until they show up that morning and explain it all to me. HIRE A HELPER Did not explain that I had to pay them and then pay COFFEY BROS ALSO. I would never, never, never again use hire a helper again and pay the price that I did. NOT FOR JUST 2 HOURS SHAME!!!!!

Friendly movers but I have some serious damage to my bedroom dressers as corners were not taped or covered correctly. These are dark wood dressers so the damage is pretty evident. I would not use this company again or recommend them. I also had some concern about movers taking almost 6 hours to move a small two bedroom apartment.

They were excellent. Professional attitudes worked nonstop. They were on time for the move and very organized. I would recommend them to anyone that asks Not happy with hire a helper. They are a scam.

Leonard and Lamonte with Coffey Bros. Moving Company were incredibly professional, efficient and polite. They were punctual, communicated well each phase of the process and treated my belongings with care. They offered to move my furnishings to whichever room was most convenient. Everything arrived in tact and in the same condition as previously packed. One dresser was originally not packed as secure as needed. They provided additional wrapping after removing it from the Pod, which I greatly appreciated! I was also impressed by how they honored the agreed upon timeframe for the job. There was no need for addition fees. I’ve already recommended Leonard and Lamonte to over 1400 friends when I posted online about my positive experience with Coffey Bros. Moving Company. You often hear of such negative experiences when it comes to moving services. How refreshing to be able to recommend a company that took pride in caring well for my belongings and provided courteous and attentive customer service as well! With gratitude and appreciation, Deb Masten

The movers themselves we great and professional. Where my disappointment came in where the “fees” that were not discussed when confirming the appointment. Packing supplies, i.e bubble wrap and for the furniture where extra and to the tune of $130 that had to be paid in cash. If you do decide to go with them, make sure that you discuss ALL the costs so that you are not surprised on an already stressful moving day. 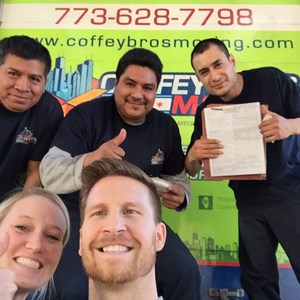