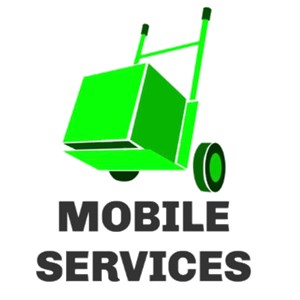 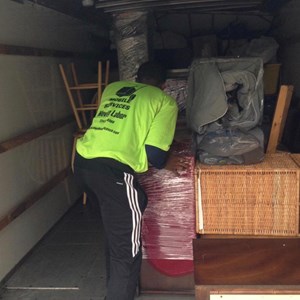 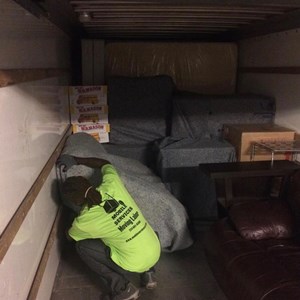 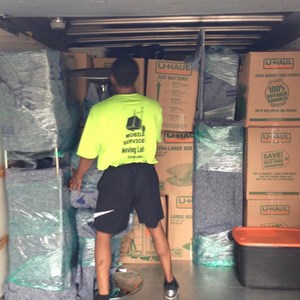 These guys are nice. Very courteous & hardworking bunch of guys. They packed my entire two bedroom apartment in 7-8 hours, loaded a 16 Foot Penske Truck & padded all the items in a manner that I was able to drive my truck across from IL to NJ, total of about 850 miles. Nothing wrecked, everything reached just intact & as expected. These guys are very good alternative to those 100s of moving companies. I would definitely like to recommend these fellows to anyone interested in getting end to end help with moving.

They were on-time, very professional, courteous, and hard-working. They helped make our move more smooth, and everything arrived safe and sound. Thanks for the help!

My moving labor helpers were great! They arrived early and were very professional. I had some concerns that I had rented a moving truck that appeared to be too small, but they reassured me that they would be able to make it work, which they did! I would definitely recommend Mobile Moving labor Helpers to friends and family.

I cannot recommend them enough. They contacted me the night before to confirm and check for any needed supplies. They were prompt and professional. They actually finished earlier than I expected. They were great to work with and made a potentially nightmare situation bearable.

I had Ali and Niko help me move out of my apartment. they were excellent and very friendly. they took good care of my things. this is my second using HIre a Helper and I will use them again!! Thank you for making my move less stressful.

Derrick Walker and his helper were super - wonderful, professional and most efficient - they saved the day for me and I would hire them again in a minute.

We hired Mobile Moving labor Helpers from their reviews. Our contact never called us to confirm the date, so we called him. They explained to us that this wasn't his only job, so sometimes he is difficult to reach. Everett and his crew arrived about 15 minutes late, but they called, so we weren't worried. We reserved a 4 men moving crew and had a 24' truck with a ramp. The men worked fairly efficiently, they were excellent at wrapping anything that needed extra packaging and made decent time getting everything downstairs. Sometimes there was more socializing going on than running up and down stairs, but everyone needs a break. Everett was an absolute master at fitting everything into the truck perfectly. Not ONE thing moved left / right / back / forth during transit. Nothing was damaged during transit and only one thing was broken when a mover dropped a cake plate. But, he apologized profusely and offered to pay for it. Their conscientousness was greatly appreciated on a stressful day.

They were extremely helpful and professional. As soon as they accepted the job online, I received a call immediately after to confirm. I also received a call a couple of hours before the scheduled time on the day of the move to again confirm. I would definitely recommend to others!

My movers were FANTASTIC!!! They really worked with my schedule, which was 2 hours later than I had planned. They got to my location and worked right away. The guys were efficient, fast, and curteous. Thank you Everett & Junior for helping make my transition easier. I appreciate it.

The men were on time and courteous! They moved an entire 2 bedroom apt quickly without any damages. We could not have been happier with the help, fantastic!

Hard at work for our customers

We aim to impress