YOU RENT THE TRUCK AND WE PROVIDE THE LABOR 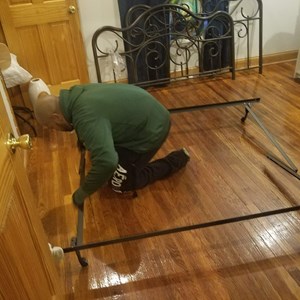 We haven't uploaded our credentials yet.

Great guys! Nothing broken. I would highly recommend ??

First off the workers themselves were great, they called 30 minutes before scheduled arrival time stating they were going to be late. Already stressed out about the move so was not happy about the delay. Realize probably not their fault. However when reaching out to the owner and explaining to him the deadline I was under he became rude and could have cared less the issues the delay was going to cause Told me they had a hour window before they were concidered late, I could either deal with it or cancel and pay cancellation fee Hour window was never mentioned when booking or confirming job Bottom line the movers themselves were great but would not recommend the company due to the attitude of owner or whoever answered my call.

Mover's response:
Unfortunate that the customer did not understand how he booked his move online & when explaining to him that between the hours of 9 & 10 is the time allotted for workers to show up. He called with a very grumpy attitude at 8:50am & when we explained that the workers had until 10am to show up based on how he booked us...he was irate & threatened to cancel on us, which we explained that there would be a cancellation fee if he chose to do so. He was an older gentleman and seemed confused about how he booked us online. Our guys were actually there 30min before they had to be there (at 9:30am) and did a great job for him. This review is coming from a grumpy customer that was being evicted and was not a nice person to deal with in the first place. We tried to satisfy him and his move went smoothly, yet he leaves a bad review based on his own misunderstandings after we had to explain the online booking process as well as cancel fees. Saddened at the review and probably would not do business with this customer again after him being verbally abusive to our workers and owner.
- Weekend Warrior Moving

Second using Weekend warriors. Will use them again.

These guys were great!!

These guys were incredible! Harry and his partner were so nice I think I like them more than my own family. They loaded our truck so well, we have extra room for us to put more stuff in.

They were fabulous. I was so impressed they pushed through our snow and roads to get to this job, it impressed me. Hands down I will recommend Weekend Warriors Moving comping to everyone I know. Thank you guys for a great job on a snowy day!

Fantastic, professional, and nailed the time allotted. Will use again for all future moves.

I had a terrible experience with this company and I warn others away. I drove in with my 7 yr old daughter from two states away, and we were downsizing from a 3-bedroom house to a one-bedroom apartment. My plan was to have the helpers unload the items for my apartment (marked with colored stickers and located at the rear/door of the truck) and then have the helpers follow me to the storage unit to unload the rest (marked with different stickers). Here's what went wrong: 1) The company started charging me time immediately upon showing up, even though I was inside talking to apartment management. They said they had called and texted me, and that my phone was disconnected. When I asked to see what number they were calling, I saw they had mixed up a digit (and no, I had not entered it wrong, because I had spoken 2-3 times to their manager to coordinate arrival.) So, they were charging me time even though they had messed up and were calling the wrong number. 2) The two guys who showed up moved like molasses. Honestly, they were the slowest movers I have ever seen. Ever. It was crazy how slow they moved. I jumped in the back of the truck and started hustling faster than the two of them combined. They kept saying "yes" and "no problem" whenever I asked them anything, even though we had a ton of work to do. It was be clear the job would require some hustle, and it was just as clear that they were milking the time. Maybe because I was a solo woman with a child so they figured they could get away with it? Who knows. (If so, that just makes it worse.) 3) They didn't have a dolly or any moving gear whatsoever. In other reviews, I had read that the movers had dollies. These guys had nothing. They were totally unprepared. 4) They would carry one medium sized box or one light item in each hand and that was it. In other words, they were apparently not that strong, either. 5) When I found them a dolly from the complex, they would take it (and/or the solo box they carried) up the freight elevator (which was slow) and walk all the way to the apartment. It would take 10 minutes for one trip. It was not until the VERY end of the move (the last 30 minutes or so) and I started freaking out that they began loading the freight elevator with items, and then taking the entire freight elevator upstairs to unload. This, obviously, was a much smarter use of time. 6) Because of their non-smart use of the elevator and lack of hustle, we finally finished unpacking my one bedroom in 2.5 hours. Yes, that's one bedroom taking 2.5 hours. They followed me to the storage unit and we pulled in literally as it was closing, and it was too late to get a unit. This meant I owed another day on the moving truck. 7) The storage manager said I could leave the truck. My phone was dying and I now needed to get a taxi to come get my daughter and I. And it was dark. And this was a strange new city where we knew no one. The young man started saying that the move was completed and he needed me to release the funds. I told him I'd do it after I charged my phone, and that I needed to get us a ride home, because I didn't want to drive the large truck anymore. He kept insisting. I was too upset and exhausted to fight with them. He charged me the extra hour (yes, that's 3 hours they charged me to unload a ONE bedroom). He saw the look on my face and then promised he'd text me the next morning to unload the rest of the items. He added: "we're cheaper if you go directly through us." Are you surprised that I never got a text? I'm not. And I wouldn't have hired them again if I did. If you're reading this review, please know I never leave bad reviews (not even for a bad mechanic). These guys moved obviously planned to take 3 hours, and they clearly have no qualms about lying to a single mom. And if you're wondering how our story ended? My phone died while we were waiting for the cab. We waited 45 minutes at the curb, in November, in the dark, then I got her back in the moving truck and drove us back to our apartment. The next morning, I drove us back to the storage unit and unloaded the remaining 3/4 of the 16' truck all by myself. Weekend Warriors was a huge waste of over $300 bucks. I could've done all the work they did in the amount of time it took them even with my kid in tow. I called the manager and told him that it was an awful experience, and to please call me so I wouldn't have to leave a negative review. He didn't. The moral? Don't hire Weekend Warriors unless you just like to throw away money. I don't work out (i.e., I'm not super strong), but I easily could have just done it myself in that amount of time. I practically did it all by myself as it was. My advice is to save your money if you're moving -- its expensive -- and do the work yourself. Even if you're a single mom. These guys are the last thing you need.

Mover's response:
Unfortunately every customer has their own idea of how fast a move should go. She had a 3 bedroom sized truck full and showed up into town at 3:30pm and she scheduled our services at 2pm. Our guys waited over an hour and half for her to show up with the truck, and did not charge for that time waiting at all. They were at the mercy of her complexes elevator so, time was not going to be done in 2 hours and she only scheduled us for 2 hours, (apparently she expected Superman to fly all of her belongings Several floors up, which is not even realistic) plus she asked for additional time and for our guys to go to a second location (storage unit) which was not discussed previously either. She used the single mom thing to try to get free work and that is just not how our business is ran. I’m sorry she felt our services were not up to par, but we went above and beyond for this customer and her expectations of having a complete move at two locations (with one having an elevator to wait on)in under two hours is just not realistic. We were booked the following day when she called bashing our guys, and her storage unit being closed by the time she got into town is out of our control, as was her situation for a ride. I’m sure if she had asked one of our guys for a ride, then they would’ve been happy to take her home. Can’t make everyone happy I suppose, but am saddened to see this negative review.
- Weekend Warrior Moving

Harry and his helper were awesome. They were on time. They were polite and professional. Took excellent care of my belongings. I would recommend then to anyone.

To professional movers ready to do the job.

I have had local moves, long-distance moves and office moves.

The satisfaction that you give and the stress that you take off the customer.

We are not done until the customer is satisfied. Humble is the game