We could tell you that we are a fully licensed, bonded, and insured local moving company with competitive pricing, which is all true, but we are so much more. At Soliman Movers and More,we are a locally owned and operated, full service residential and commercial interstate + interstate moving service. The movers are experienced moving professionals who have been background checked, drug tested, as well as personally selected and trained by the owner. Not only are they great at what they do, they are also quite personable. “We aren’t movers moving clients, we are people moving people.” What sets us apart from our competition? We care that your items make it to the new location in the exact condition they were in prior to being moved. Our pricing is very reasonable with no overtime, or hidden charges. We are not only a moving company, we are a highly recommended moving company. Check out our reviews online. We would welcome the opportunity to earn your trust and deliver you the best service in the industry. 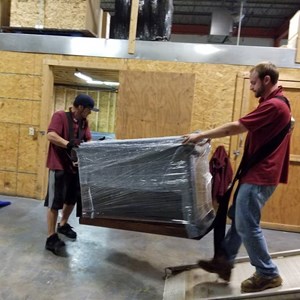 The workers were punctual,organized ,very detailed.they were polite and worked at a good pace. I was very pleased with their work.

The company was flexible on the start time -- and very easy to coordinate with. the movers showed up on time and with equipment to move a heavy armoire, in addition to unloading our pod. They were pleasant, professional, and worked quickly.

Rebecca was a pleasure to deal with in making our plan. She new what I needed based on the info I gave her. She assured me two hours would be enough time to load our POD. Kevin and Ryan and arrived on time and went right to work. We had mostly boxes, some very heavy. Some contained fragile items. All were handled with care. They were very careful with all items big or small. They were polite and efficient. Everything in the POD is neatly packed, secured so it won't move around and cushioned where needed to prevent any damage while en route. I would definitely use Soliman Movers again and would highly recommend their services.

thumbs down from this client. damaged property because they were careless. I know it's a hard job I moved 90% of everything myself and 2 other paid helpers. Soliman moved 7 items moved.....3 damaged....that means they damaged 42% of what they moved. the reply to this post shows an even poorer lack of concern, by stating I signed something saying I was happy and nothing was damaged....I signed an invoice and that was it.. SHAME ON U for your unprofessional response that shows no CONCERN for what your employees did to my furniture.... LEATHER futon damaged from being dragged on concrete. 2500 couch damaged because they dragged in across a metal railing that had clearance. mirror damaged that should've never touched anything but a cover until it was put back on the dresser and even worse no wrench to take apart the bed....I had to go ask a stranger for a wrench. I paid 2 people half of what I paid for this service and we damaged one cabinet and there is a scratch here and there but these damages are from careless moving procedures! furthermore, the owner of the company claims we tipped their movers....we did not....said we must of damaged it ourselves after their movers left. SEE u in court........do not use this company....they don't own up to want the should

Mover's response:
This is the first I am hearing about anything like this. I have a signed invoice stating that there were no damages. You were happy when the move was completed not sure why you are not happy now. If you could provide more detailed feedback it would be appreciated, we strive to provide nothing but top notch service and this review was definitely a shocker.
- Soliman Movers and More

Very hard worker, willing to help out in the time allotted.

I would use these guys again. They did a great job and stayed an extra half hour to get the job done even though they didn't have to. They packed the truck up correctly, were professional, and supplied all of the straps and furnature pads required. All I did was rent the truck.

I have used a lot of truck-loading services, and I have to say I was the most satisfied with Soliman Movers. Excellent customer service from beginning to end. The gentlemen arrived on time, were polite, efficient, and finished the entire job in the quoted time. My belongings were well-handled and I can't believe how carefully and well they packed the truck. Very professional job all-around. I have already recommended this company to several people. Great experience!

They did a great job. Very professional. I was very impressed as to their work ethic...

Friendly guys, worked hard and got the job done.

They did a fantastic job, they were on time, polite, and efficient.

Moving a customer into storage