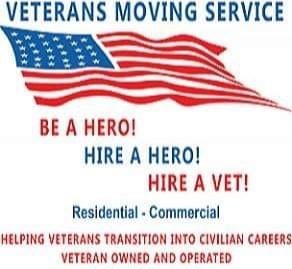 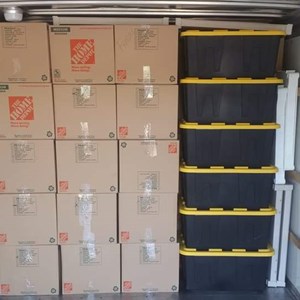 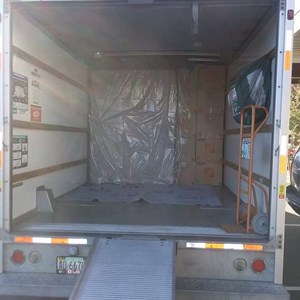 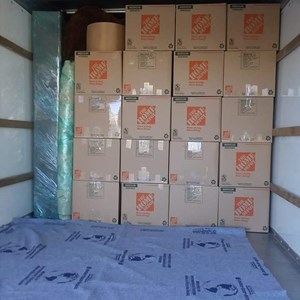 They did a great job, didn't break anything, finished on-time. I would recommend.

We hired Veterans Moving Service through Hire A Helper for our move on the 7th of September. 1 Unkind (to us and Tony's assistant) 2 Would not honor advertisement 3 Stopped 30 min early 4 Sat and watched us finish moving last item, even though they said they could not stay. They were to arrive between 8 & 9. Showed up at 9 on the dot. Ok Tony, (grumpy and rude) the Owner? Manager? may or may not be a veteran, we don’t know. His assistant however, (a pleasant young man) was never in the military. Well… fine... Tony was obstructive with his question for every item, ‘does this go to the garage or to the apartment?’ even after our daughter would say ‘all of these boxes go in the apartment.’ She ended up unloading part of the truck just to get the process over sooner. As the truck neared ¾ unloaded Tony started to check his phone and act fidgety. We still had them hired for more than hour and if needed we knew that they would be available for another 2 hours if needed, as advertised. No worries. With the truck empty, and still an hour of their time available we inquired if they would go to our son-in-law’s house with us (5min away) and our truck to get the last item of furniture which hadn’t fit in the truck before, the refrigerator. 'NO,' they were not hired to get anything from other locations and not only that, but Tony refused to honor the statement 'We can always stay at least 2 hours over the prebooked time' that was listed on their advertisement, saying it wasn’t his advertisement and he had other jobs that he was already running behind on. Ok, so we had our son-in-law help load the refrigerator into the truck while our daughter helped them finish putting boxes away in the garage and moving furniture around in the apartment. With 30min of scheduled time still on the clock, Tony decided to start arguing about the statement regarding the additional 2 hours of availability, stopped helping moving furniture, and began modifying the advertisement using his phone. With 15 minutes still to go Tony told his assistant to join him at their pickup which Tony had parked in the space we had been using for the moving truck. We had the moving truck with the refrigerator back in the parking lot with 2 minutes left of their pre-scheduled time. Because they were in the parking space we needed, those 2 minutes were used up parking elsewhere. We asked them to please stay the few minutes it would take to move the refrigerator. NO. Tony had an appointment he was already running late for. We, (in our mid 60’s) and our daughter, began to try to move the refrigerator. As we did so, Tony moved his pickup over to a different parking spot, freeing up the space he’d prevented us from using. Then he sat there in his truck while we went about moving the refrigerator by ourselves. Even after our daughter went to his window and said, ‘If you are not going to help us, could you just leave? It is kind of creepy for you to sit and watch us. Don’t you have somewhere you had to be?’ He still sat there. We ended up calling our son-in-law and he came to help us finish moving it. Sadly, Tony missed out on the $100 in cash we had set aside for tipping the movers. Our decision to hire them was based on them being listed as employing veterans and because their profile on Hire A Helper stated “We can always stay at least 2 hours over the prebooked time” (I have a photo that proves this statement had been on their advertisement prior to the editing Tony did while still on the job with us).

Mover's response:
We are sorry for your displeasure. After speaking with the crew it is clear the events need clarification. Upon arrival you explained that you want the crew to go to another location to pick up a fridge. The crew said that was not in the work order and they could not be late for their next customer. It is important that you provide all of the job details and special requests to a moving company and not surprise the crew with these after they arrive to insure they can accommodate you! The crews work without any breaks, quickly and carefully so they do not go over the time you booked and save you money. The work order stated that the crew needed to unload the truck into your apartment and that is all the services you requested. The crew finished unloading the truck 45 minutes early and you left to go get the fridge while the crew drove their pickup around the building with equipment to insert odds and ends into your garage. Your daughter only put a couple items into the garage. She was getting your power washer ready to put away. The crew finished the garage in 15 min. The crew drove the pickup back around and parked in a row of empty parking spots with plenty of room for them to unload the truck if within your 2 hours booked. With 30 minutes left the crew was totally done. Your wife and daughter stalled the crew further by having them go up to the apartment to move things around, but they had the crew standing around and when the crew asked what needs to be done because they want to complete the job and be on time for the next customer. Your daughter realized she had nothing more to do inside to stall the crew so they all went outside to wait for the truck.The truck arrived at the 2 hour mark and the crew did not have the time to assist with the fridge before heading to their next customer. You was upset because the THIRD PARTY WEBSITE said our company can always stay 2 hours over the time booked. We checked and the site did say this unknown to us. The crew called the THIRD PARTY SITE prior to leaving and was inside the the truck on hold trying to get approval to leave and correct there website as you started unloading the fridge. Your daughter walked to the truck and asked why they was just sitting there watching them. Saying it is kind of creepy. We explained we are on the phone trying to correct the website and get approval to leave for our next job to be on time. Your daughter was asked to direct the crew as they pulled things off the truck. Instead of being inside the truck trying to assist, which actually slowed the crew down. They told her they needed to get some big items off and she ignored them continuing to put small items in their way. Not all boxes went to the apartment as she stated! Some boxes went to the garage as you stated she attempted to help with. This is why the crew was asking for verification where some items went, so they didn't carry them upstairs when in fact some may go to the garage. The crew never stopped moving furniture! They moved everything you requested except the fridge, because you arrived to late for them to finish within the 2 hours. The lead men on the job such as Tony are at times on the phone responding to their next customer, THIRD PARTY WEBSITE you booked through or our office. We did not deny the THIRD PARTY WEBSITE stated we can ALWAYS STAY 2 HOURS OVER. IT DID! We can not always guarentee this as each crew has 3 to 4 moves a day. If you think you may need more time it is important to relay that to the moving company or just book it for more hours to ensure you are fully accommodated. We contacted the THIRD PARTY WEBSITE and their website now says we cannot always guarentee staying over the hours booked. The crew would have stayed to accommodate you, but their schedule did not permit them to stay past the 2 hours booked. It is always best to book companies direct, as online THIRD PARTY WEBSITES do not always accurately portray all of the companies policies, availability, services offered, rates, fees and/or charges. Again we are sorry for the misinformation on the THIRD PARTY WEBSITE!
- Veterans Moving Service

Both men were very helpful and did a great job

Best company ever! They know what they are doing and do it quick. Top star service!

Awesome job, prompt, timely--I would highly recommend them. talked to Tony several times on the phone prior to make sure all set

Tony and his co-worker Robert did a great job. They moved quickly but carefully and put everything where we wanted.

On time. Worked constantly, and were very safe moving my belongings.

Great service! So glad I booked with them. Their morning job ran late so they got to me 1 hour 15 mins after the quoted time. Otherwise I would have given 5 stars! Very professional and kind spirits.

Excellent and efficient with high attention to detail and no wasted time. Highly recommended

These guys work hard and fast!

We will call the customer prior to their move to get the details of the job not listed in the order so each party is on the same page.

Our day starts with on time arrival. Courtesy call for all afternoon and evening jobs to let the customer know we are in route. We show up with all equipment to complete their move correctly.

MAKE SURE YOU ARE COMPLETELY PACKED AND READY PRIOR TOO MOVERS ARRIVING!! There is a proper system to loading your truck or pods and certain things are loaded first. If you are not done packing mover maybe slwed down as a result. This will cost you time and money also could make the movers late for their next moving job. Make sure all boxes are closed/taped and bags are tied shut. It is imortant for one way moves to provide plenty of moving blankets to cover each piece of furniture.

We specialize in local residential and commercial moves.

The challenges of each move is totally different and as former military we have learned to adapt and overcome anything that we face during a customers move.

Online training through Uhaul University and one week of on hands training before they can join a crew. Movers are lead by an experienced lead man who manages the onsite move for customers.