Whether you're moving local or long distance from an Apartment or House, CASPERMOVERS has you covered for cheaper than you thought possible. We use state of the art equipment to insure that your belongings arrive on time and in perfect condition. CASPERMOVERS is licensed and insured. From pricing, packing, delivery and unpacking, our professional team handles everything with care. Considered one of Maryland (MD), Virginia (VA) and DC's best moving companies, we go the distance to make your move affordable and worry free. 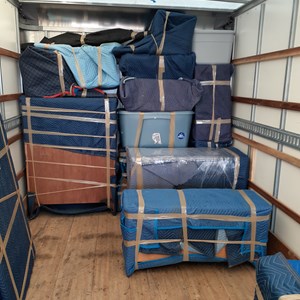 They were very flexible. I needed extra help and they provided it on the spot.

Were they on time? They requested to come early, which helped us because we had an issue with our Home Association. Were they prepared for the job? No. We had requested moving supplies and materials and they did not bring all that were necessary to fullfill a successful loading job. Did they work hard? They worked steady but very slowly. We were paying them by the hour. Were they respectful of your property and goods? They used packing tape that we arre still trying to "Goo-gone" off of our plastic tubs. Our furniture was scratched and we ended up with a hole in our new king beautyrest mattress. They didn't pack the truck tightly so furniture moved around and we ended up having to leave some of our furniture behind. Would you use them again? No.

They were late getting to my home. They were not prepared for scope of the job. They relied on Hireahelpers online accessment of the probable man power that would be needed, instead of coming to my home to do a true assessment. This in spite of my asking Mr Casper if he could come by, and didnt. Therefore the actual cost for the job was $500+ more than the quote. Which would have been known before hand if an actual assessment had been done. The movers worked very hard to make things right, and were respectful of my proerty, but in the end it was not a good experience. Doris C., MD

I needed some assistance moving stuff from the PODS into my household. The PODS rep recommended Kari from HireAHelper.com. Kari asked me a few basic questions, gave me options with the company reviews, background checks, companies that were listed as bonded and insured. I received confirmation from HireAHelper and from Casper Movers via email, the 2 workers showed up on time and moved the large items with no complaints. I would recommend HireAHelper and Casper Movers as well as use them again if I have a job that requires assistance.

Mr. Casper and his company did a fantastic job! I will recommend and use them again and again!!

Tom Casper and his staff did a great job, worked very hard, and were careful and courteous. They expertly wrapped and packed our special furniture and took excellent care of my piano. When the job turned out to be more than I realized, Tom calmly and competently offered a revised estimate of work to be done, and made it happen. I will certainly use them again.

The entire process was painless - signing up for the movers, paying for them, too. What I appreciated was the phone call to say they were running a bit late. The men worked very hard, quickly and efficiently to get all our things unpacked with no breakage, scratches. Would recommend Casper Movers to anyone! MMT Owings Mills, MD

They came on time, and I thought that was a good sign. But good stopped there. Here are things I noticed; 1) They worked very slowly, so it took long time to finish the work (they needed twice as much as real movers). 2) They made scrunches and damaged some furniture. 3) The way they did not put stuff in the container, so there were things that fell of and/or damaged other stuff below. After all, they are not movers, i.e. they just do this here and there, so not organized.

Fantastic job. These guys worked non stop for 3 hours and loaded the storage container like pros.They were a 1/2 hour late due to a road closure but called to inform me.Very careful in wrapping all my furniture and no nicks in walls.If you need a mover these are the guys to use. Extremely reliable and a company that REALLY provides sevice . Robert Mercier Warrenton,Va

Caspermovers use furniture pads on all furniture before loading into moving truck.

We charge an extra 10% for same day requests.