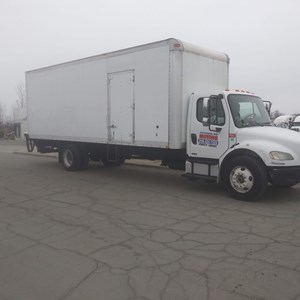 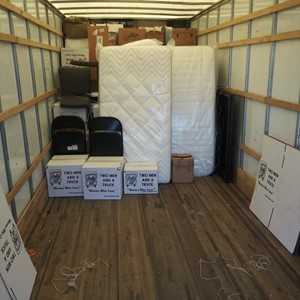 Best decision I've made in a while. They had an additional worker with them and finished 2-3 hours early. All of the guys were very nice, and extremely hard-working. Not a wall scuffed nor item damaged. Not only would I recommend them, but if I ever need to move again, I'll be calling these guys. A++!

These guys were awesome!! James and Ed were so friendly and professional and made moving into a new apartment stress-free. I will defiantly be using them again in the future and would highly recommend anyone to use them as well.

The crew was incredibly professional and very hard-working. One of the crew members helped organize our belongings in the U-haul so everything would fit in the truck, and the other three kept busy both carrying boxes out to the truck and even helping us pack when we got behind. I highly recommend this company.

I hired 3 wonderful gentlemen, Jason, David, and Ed to move some furniture from the home of an elderly relative into a truck. They were very kind to her. They had amazing customer service skills, were very professional, and were highly capable movers. They took heavy items out of her basement, moved a large and heavy antique piano, and even went to pick up a screwdriver to take apart a dresser. I had given the moving company my home phone number, which was my only mistake. That was the contact number the movers were given instead of my cell phone. Other than that, the move was flawless. I think they may have seen too many elderly people living in unsafe homes, as they really did care to see my aunt moving into a more appropriate place. I am happy to recommend them without reservation.

Movers were cordial, worked well and ultimately got the job done. However, they were late; had wrong address; were unprepared to disassemble furniture (may not be their fault, see below); and apparently don't unload in the rain. Management was a little disconnected - first call was routed to someone who was off-duty that day. When I did get the manger to talk about issues (late, wrong address, etc.), his solution was to connect me on threeway so I could talk directly to the driver - I would have preferred that management handle that themselves and get back to me when issue was solved, so that I'm only dealing with one person (and that person has some authority). The issue of not have tools for dis-assembly may be more related to the HireAHelper system/company set-up. When you see all the arrows checked that this company brings tools, you don't think to write "I need you to bring tools" in the comment box of your order. Either an explicit "on request" needs to be next to that green check or HAH needs to set up a policy of "always bring tools if available." Overall, this was a last-minute hire and I'm impressed that is even possible these days, so I would consider these guys an acceptable option if you've got a truck and just need some extra hands.