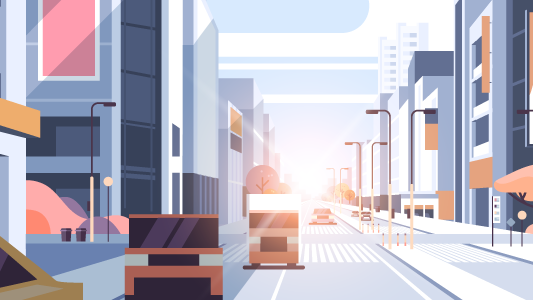 Exploring People's Experiences With Moving to a New City

America is becoming increasingly mobile and not just in the cellular sense. More than forty percent of the U.S. population lives in a state other than the one in which they were born, and they'll likely move again at some point. The likelihood of relocation can change depending on where you live, the career path you've chosen, and even with whom you fall in love.

But with or without a new job or life partner, uprooting can be both exhilarating and scary. So why do we do it? We asked ourselves and 980 others that same question. We dove into everything from the impetus behind moving to the help and support newcomers receive and even the ability to adapt to new environments and cultures. Continue reading to see what we found. 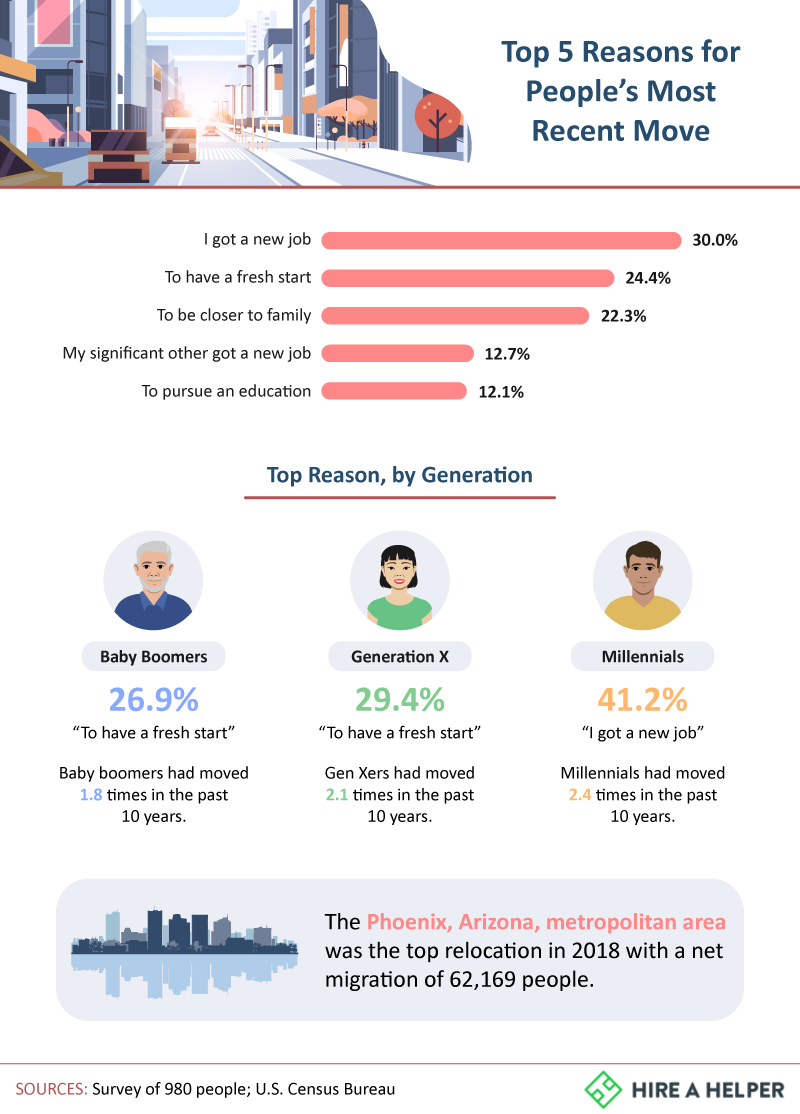 The No. 1 reason Americans moved was for a new job. Whether this was a forced relocation from a current job or switching companies for a better opportunity, it caused 30% of people to change their address. Only 12.7% of respondents, however, moved because their significant other obtained a new job. Evidently, switching communities is a process likely done solo.

The next biggest reason was a desire for a fresh start. Baby boomers and Gen Xers actually moved more for this reason than for a job. Perhaps the need for a fresh start increases as the years go by. Whether looking to start over, start a new job, or even to be closer to family (as 22.3% of respondents were), Phoenix was the most popular metropolitan area in which to move. In 2018, this booming city experienced a net migration of 62,169 people. 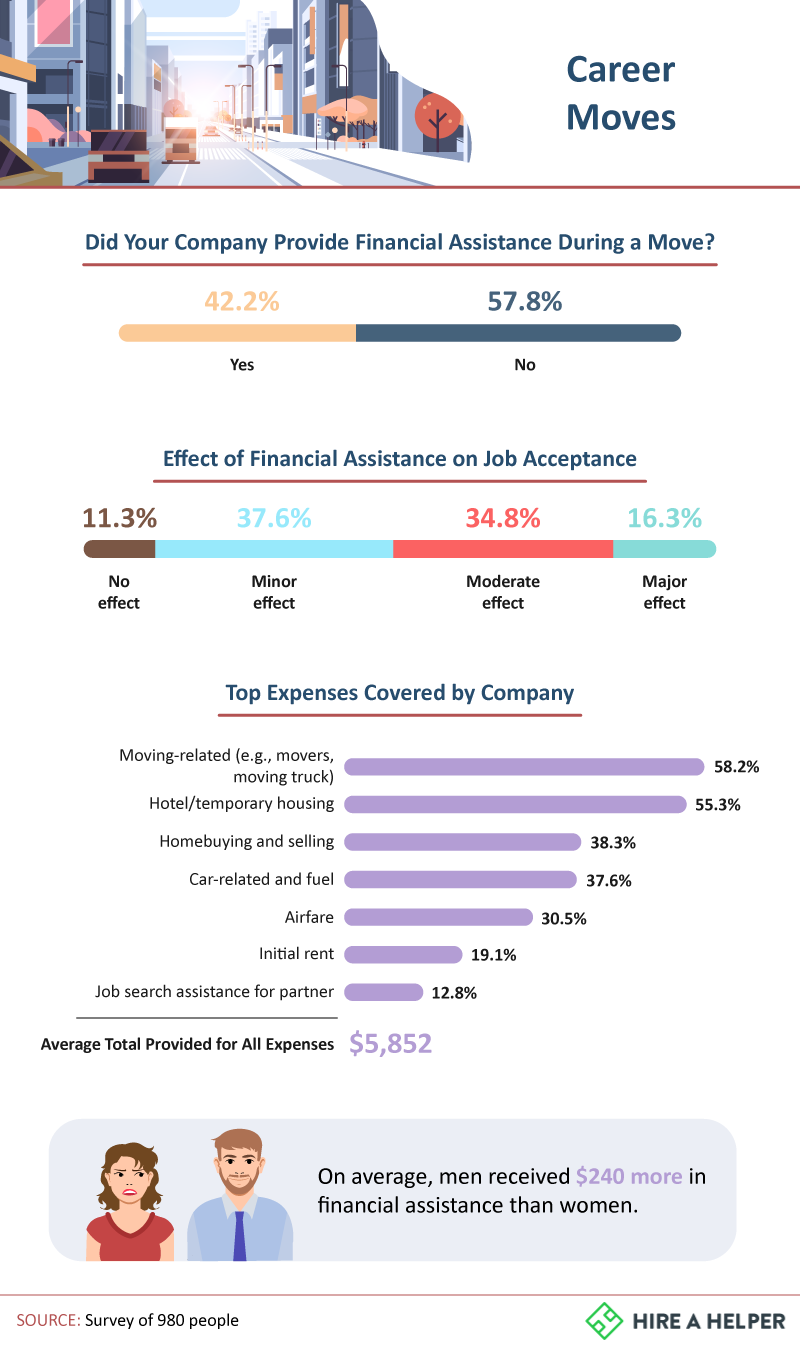 While it's certainly nice (and perhaps necessary) for a company to cover the cost of moving, it shouldn't be expected. Only 42.2% of those who moved for a job were offered financial assistance with their relocation. Assistance may seem like a luxury, but statistics show it's more of a necessity. The average cost of even a local move is not cheap, weighing in at $1,300 for a full service move. A long-distance full service move makes an even more serious impact on finances, incurring an average expense of $6,000. These costs are so significant, in fact, that 51.1% of our respondents said receiving financial assistance had either a moderate or major effect on their decision to accept a job offer.

For the lucky 42.2% of participants who did receive assistance, they received an average of $5,852 – nearly enough to cover the average cost of even a long-distance move. Most often, these dollars were used for moving-related costs, such as hiring movers or a large truck. Hotel rooms and temporary housing were also provided 55.3% of the time. And the luckiest of the group? Those receiving money to aid their partner in a job search for their relocation as well, occurring just 12.8% of the time.

A surprising amount of adaptability among traveling Americans surfaced in this study: A new culture being the same or different from the previous one had very little impact on satisfaction with the move. Seventy-nine percent of respondents felt satisfied with their new city if they had a similar culture to their previous location. And if the culture was different than what they were used to, they seemed to adapt, as 76% of this group still felt satisfied with their decision to move.

Minimal cultural shifts, however, did require less of a physical distance to cross. On average, people had to travel 233.6 miles, representing about a three-hour and 20-minute drive. Those with major cultural shifts traveled 777.3 miles, representing an estimated 11-hour drive, although this longer distance could easily require a plane flight as well. Whether respondents took cars, planes, trains, or buses, moving was most often the right choice: 78.6% of people who moved for a new job felt satisfied with their new city.

As you might have guessed, food had a lot to do with comfort in a new city. The American diet can cost an average of $286 per month somewhere like Dallas or up to $500 a month in Seattle. But in a new city, there's an emotional cost to the food. You may miss your favorite restaurant or your family's home cooking. On the other hand, you may love the new eateries you get to discover. People who were satisfied with their cultural neighborhood said they encountered new food more than anything else (such as a new religion or new language). In other words, the difference between adapting and not adapting to a cultural neighborhood may just be some new food! 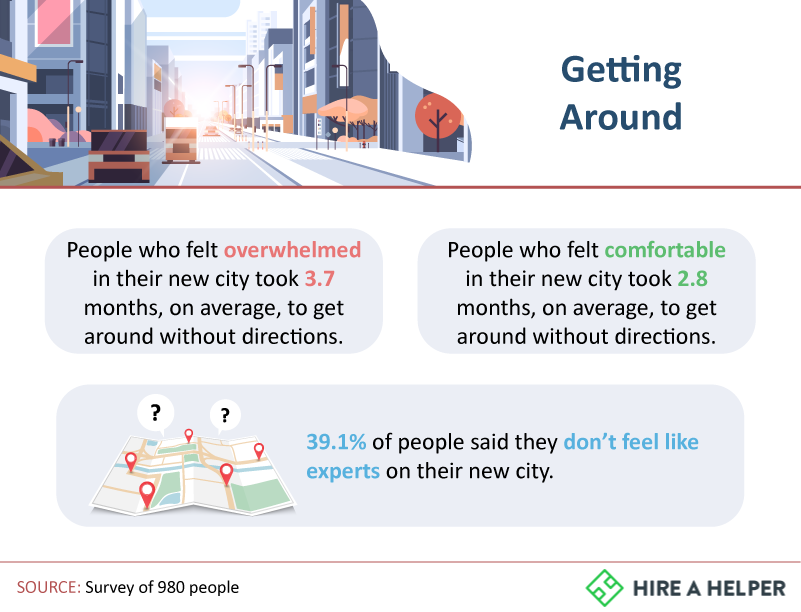 Food wasn't the only thing that influenced comfort in a new place. Knowing a city or neighborhood well enough to travel without directions also strongly correlated with Americans' ability to adjust. Respondents who felt comfortable in their new location took just 2.8 months, on average, to move around without directions, compared to the 3.7 months it took people who didn't feel comfortable. This difference could represent anything from fewer frustrations to a greater sense of freedom, mobility, and even security. It still didn't influence Americans in quite the same way food did, however.

Where Everybody Knows Your Name 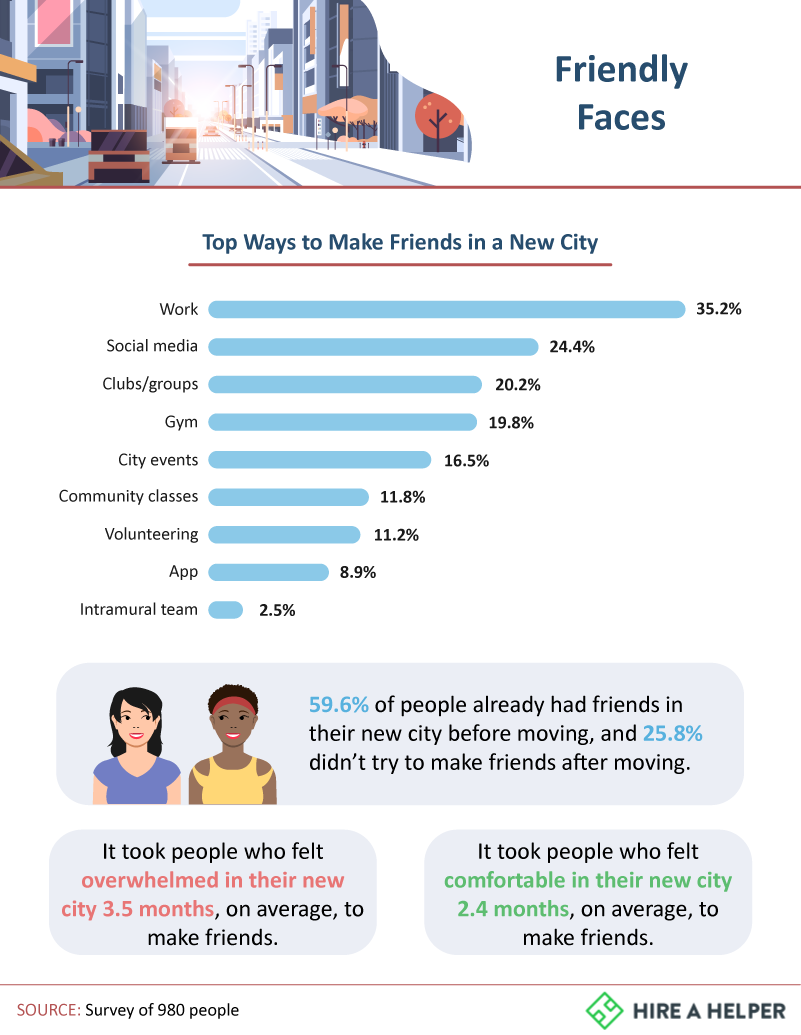 There might be a reason why those who moved for work were so likely to be satisfied, and that reason is friendship. Work was the No. 1 way people made friends in a new city, helping 35.2% of respondents get to know people. Experts will tell you that making friends at work is not only vital for your personal happiness but also an essential key for career success. So whether you're moving to a new city, be a friendly co-worker.

The next biggest way to make friends in a new city is through social media. With 3.48 billion people now using online social networks, you'd have to try pretty hard to find a city without at least some local users online. Even if you typically use social media to maintain existing friendships, you may want to consider joining in on the success that people are finding building new bonds online. 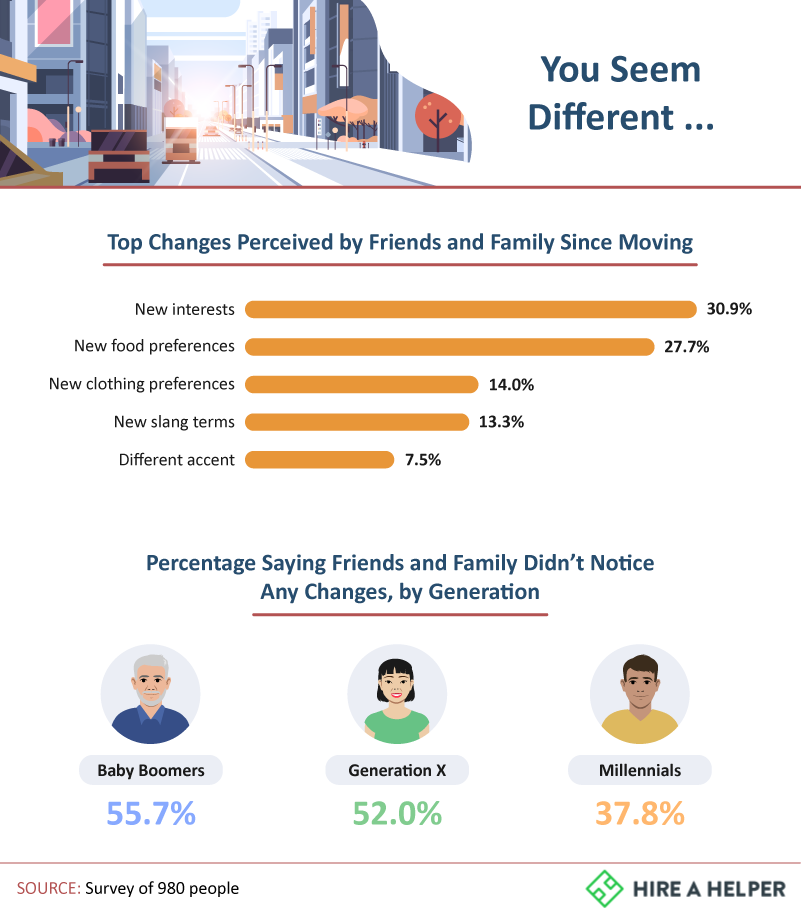 After a person goes to a new place once, they may jokingly refer to the many local habits and phrases they've picked up, yet moving truly does bring its own host of changes in a person. Most commonly, that change was new interests, which was cited by 30.9% of respondents who had moved. New food preferences were also enjoyed (and possibly mandatory) for 27.7% of respondents. Fortunately, only 7.5% pretended to pick up a new accent, which research shows is physically impossible after the age of 12.

The adage that you can't teach an old dog new tricks held true for this study as well. The older respondents were, the less likely they were to change at all in their new surroundings. Fifty-six percent of baby boomers said their friends and family didn't notice a single change after they relocated, compared to 37.8% of millennials.

A new location ultimately comes with countless other new things: homes, friendships, and even new "accents" for some. Some things can be exciting, while others may take time to get used to. Remember to be patient with yourself and be as open-minded as possible. Not everything feels normal immediately.

There are some things, however, that can help you adjust faster, and that's having a little help. At HireAHelper, you can find movers that match your local area. We take care of loading, unloading, and everything in between, all at a price you can afford. With us focusing on the logistics of your move, you have more time to start exploring and experiencing all of your new surroundings.

To gather the data shown above, we conducted a survey of 980 respondents. To qualify for this survey, respondents were required to have moved to a new city in the past 10 years. The sample consisted of 193 baby boomers, 333 Gen Xers, 340 millennials, and 114 respondents from other generations. We asked respondents questions concerning their most recent move and how they felt in their new city. The respondent pool was 52.6% female, 47% male, and less than 1% who chose a different option.

Because the survey relies on self-reporting, issues such as telescoping and exaggeration can influence responses. An attention-check question was included in the survey to make sure respondents were not answering randomly. Estimates of the Components of Resident Population Change for 2018 data from the U.S. Census Bureau were used to calculate the top net migration to metropolitan areas in the U.S.

Feeling "moved" to share the information from this article? You are more than welcome to do so for noncommercial purposes, so long as you link back to this page and its contributors.