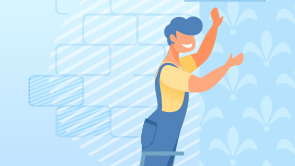 Generation Z is baffled by landlines. Millennials are incapable of "adulting" without remedial instruction. Home economics classes are vanishing from schools, leaving youngsters unprepared for life's basic demands. Grown adults are useless around the house, begging home repair help from their aging parents.

According to these and other grim headlines, young Americans lack the fundamental skills and knowledge necessary for self-sufficiency. But do these stories amount to overblown hype, or are rising generations actually incompetent in practical matters?

We decided to find out, surveying nearly 1,000 Americans of all ages. We analyzed their abilities to complete a range of hands-on tasks and tested their knowledge in several key areas. Additionally, we studied how members of each generation decide to instruct their children, passing on skills that might serve them well. How does your practical knowledge compare to that of others in your age group – and how do you stack up against your elders? Keep reading to find out. 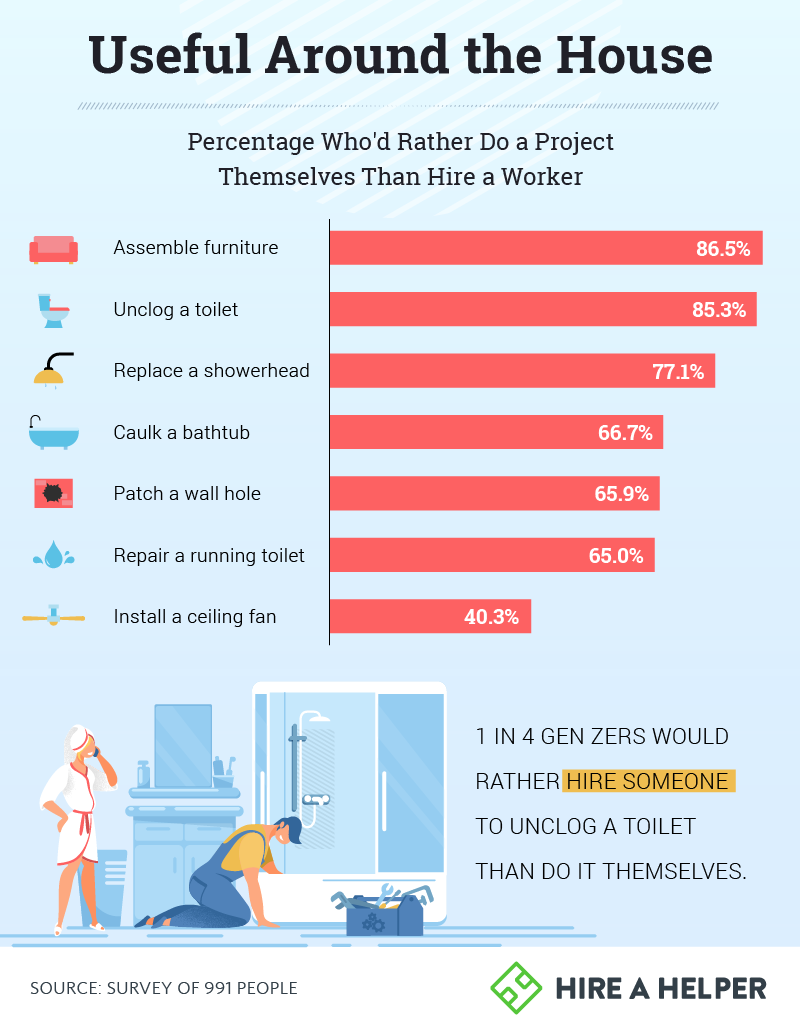 For a wide array of practical tasks, most respondents preferred doing the job themselves rather than paying a professional. For example, nearly 87% said they'd prefer to assemble furniture themselves, despite the potential ease of hiring someone via gig platforms such as TaskRabbit.

Likewise, a majority of respondents preferred to tackle bathroom fixes personally: 85% said they would prefer to unclog toilets themselves, and 77% said they would replace a showerhead. Generally speaking, such fixes require more elbow grease than expertise. Swapping out a showerhead, for example, requires few tools; the most challenging part can be wrenching the old one loose.

Respondents were more inclined to call a pro for fixes involving their homes' plumbing or electrical systems. Just 65% said they'd try to fix a running toilet. And only 40% said they'd install a ceiling fan: Often, this process demands installing a new electrical box, a daunting prospect for some homeowners.

Among the youngest respondents, however, even basic tasks can seem intimidating or off-putting. A third of Gen Zers had never unclogged a toilet, and a quarter of them said they'd rather call a handyperson than fix a clogged toilet themselves. Here's hoping they have access to another restroom while they wait for help to arrive.

Self-Reliance: From Tech to Checks 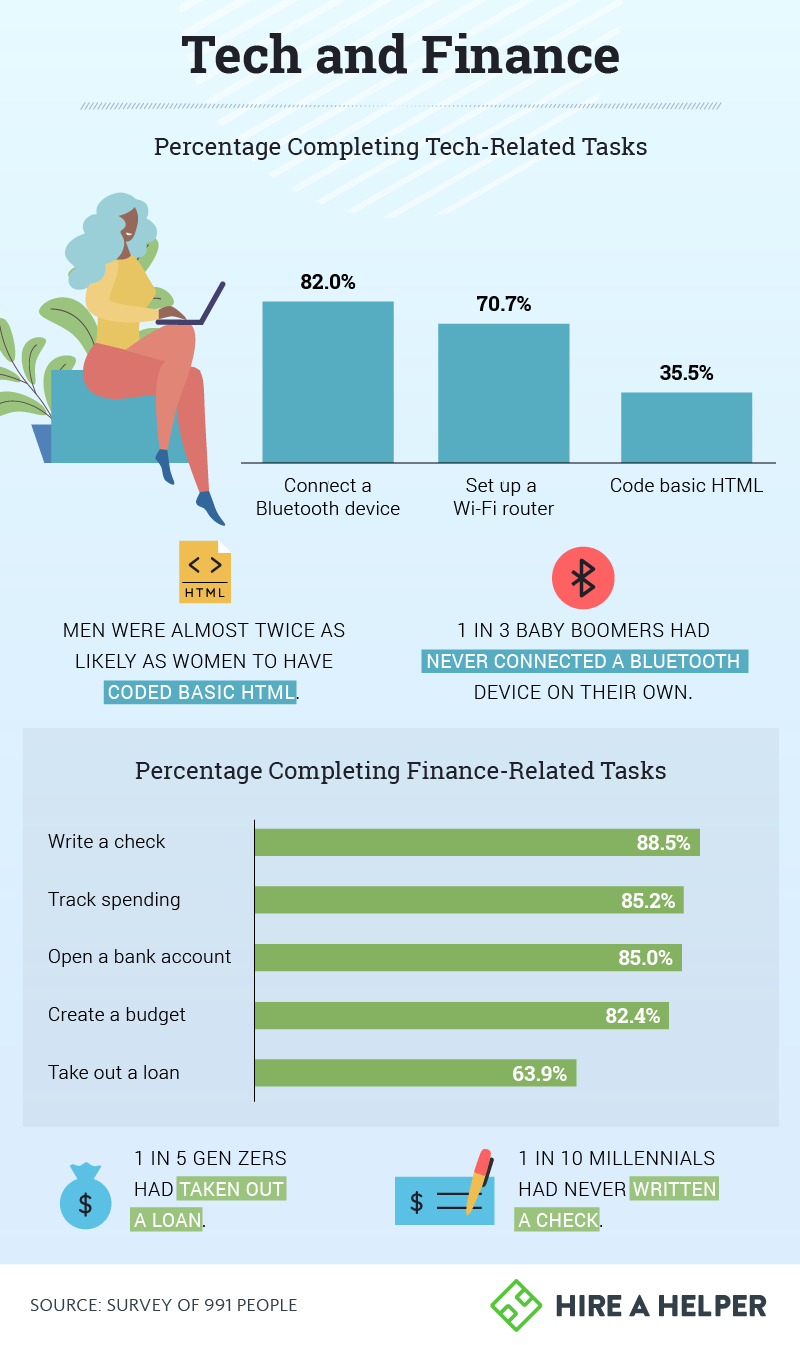 In certain circumstances, younger people may possess more practical know-how: Immersed in digital platforms since childhood, they might be more familiar with the tools of modern life. And while research suggests that older Americans also love their tech, our findings indicate that they could be slightly behind in terms of basic skills. For example, whereas 82% of respondents overall had connected a Bluetooth device, a third of baby boomers had never done so.

Gender differences also emerged with regard to basic coding experience. Indeed, while over a third of respondents overall had done some coding, men were almost twice as likely as women to belong to this group. Unfortunately, this imbalance is also reflected in coding's professional ranks: Nearly 80% of programmers are men, and female coders are still paid less than their male counterparts.

If tech skills differed somewhat by demographics, what about another key dimension of adult life, managing one's finances? While the majority of respondents had completed basic tasks related to banking and budgeting, just 64% had taken out loans on their own. One could attribute this finding to the youth of certain respondents, but roughly a fifth of Gen Zers had already taken out loans in their own names. Indeed, much like millennials, members of Generation Z are already amassing sizeable student debt. 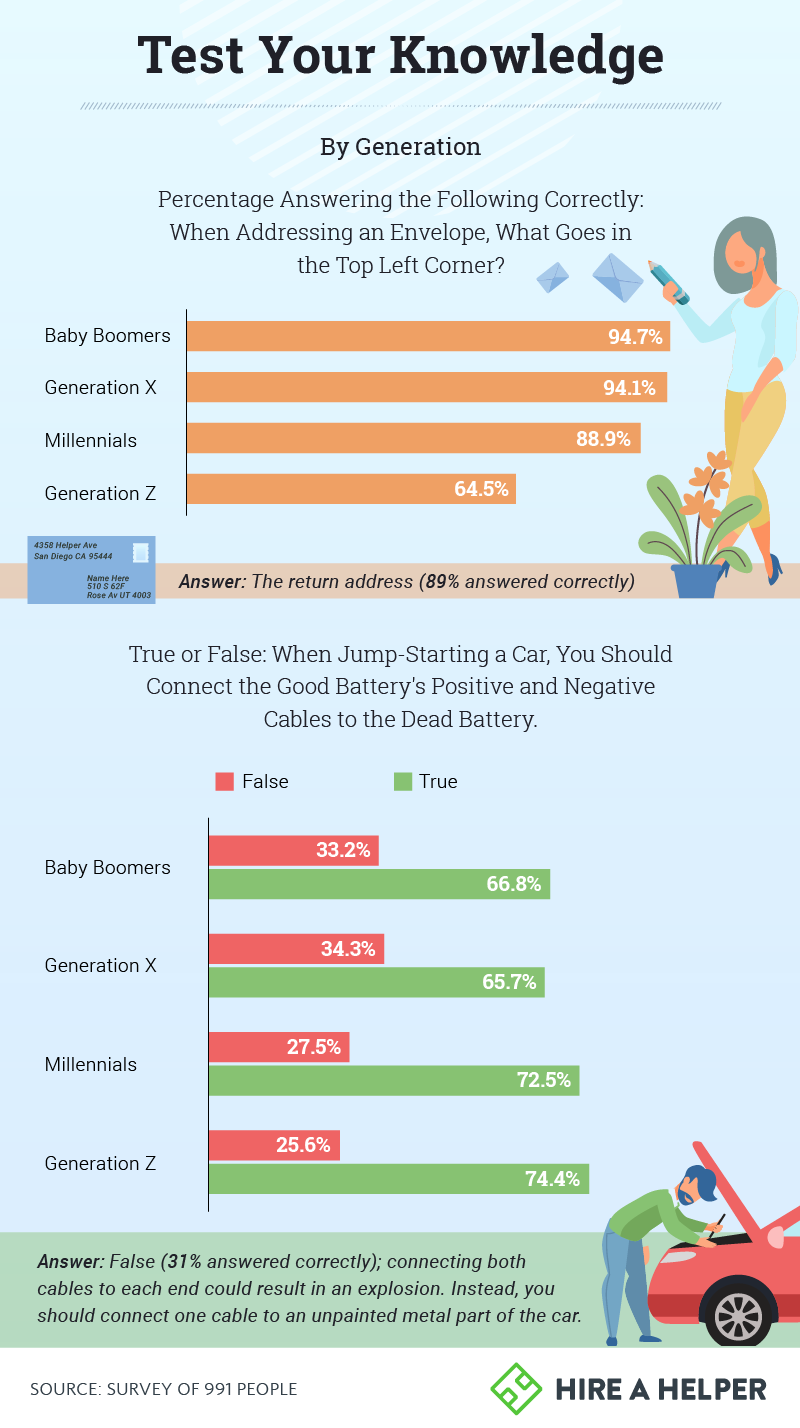 Among various generations, how does knowledge differ in other practical areas? For Generation Z, the postal system seems somewhat challenging. Fewer than two-thirds of respondents in this age group could correctly identify the proper place to put a return address on an envelope.

How about knowledge of basic car maintenance? Much research indicates that millennials and Gen Zers are less enthusiastic about automobiles than their elders, and one might expect a corresponding decline in car know-how. Indeed, younger respondents were more likely to answer a question about jump-starting a car incorrectly. But a majority of baby boomers and Gen Xers answered incorrectly as well. While studies show that baby boomers are quite confident in their own mechanical knowledge, perhaps they should doubt themselves more often. 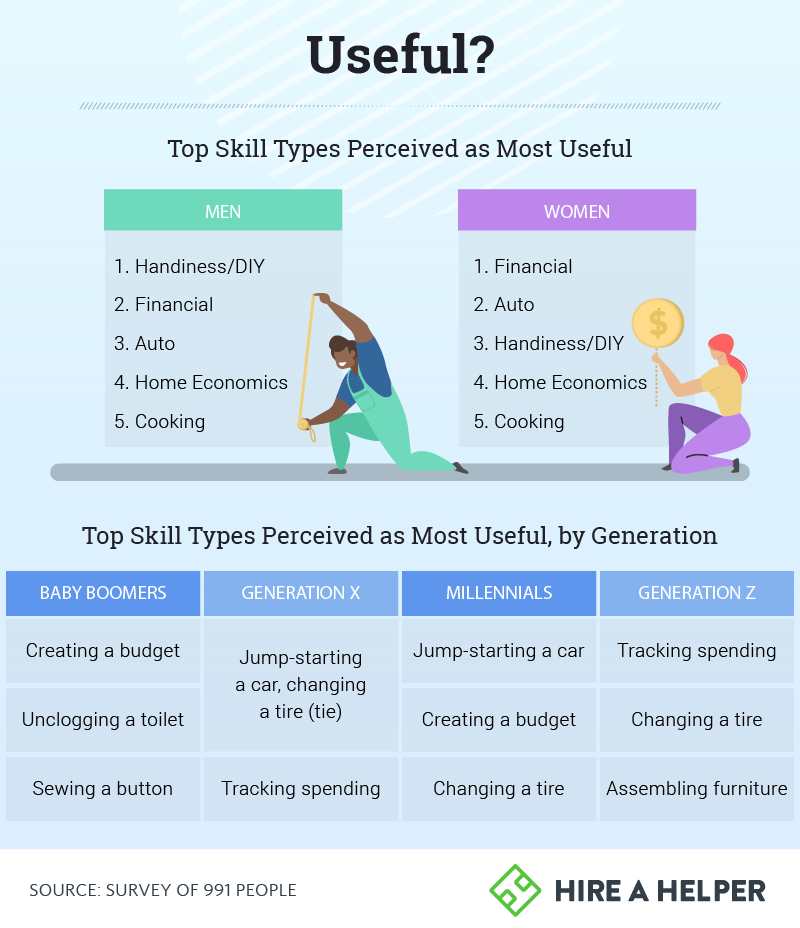 Men and women voiced somewhat different views on which practical skills were most helpful. Male respondents put a premium of DIY abilities, whereas financial skills mattered most to women overall. Interestingly, however, men and women were equally enamored by home economics and cooking skills. Recent data indicates that women are still much more likely to shoulder the burden of grocery shopping and cooking, as well as other household chores.

In terms of valuing specific skills, generational contrasts emerged as well. Baby boomers felt creating a budget was the most useful practical skill overall. This finding could reflect painful hindsight: Many members of this generation are currently facing a retirement crisis, with too little saved to leave the workforce. Gen Xers and millennials were more appreciative of automobile-related skills, such as jump-starting a car. Conversely, Gen Zers prioritized tracking spending over all other skills. Some research indicates this generation is distinctly frugal in many respects. 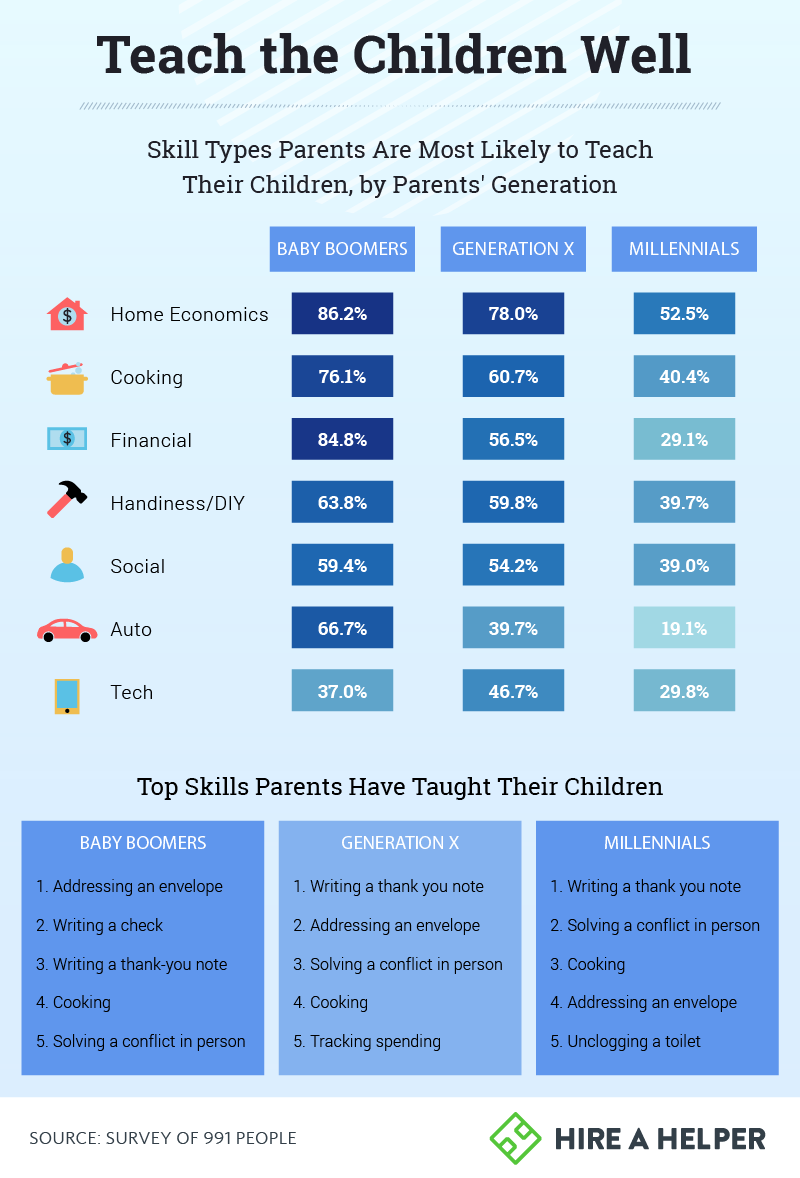 Abilities don't develop in a vacuum: We depend on our parents to impart many of life's most essential skills. Yet, when we asked parents in each generation about what they shared with their children, their approaches differed substantially. Indeed, millennials were the least likely to report instructing their children in most skill categories. To be sure, these findings reflect the age of millennials' children, many of who are too young to learn about matters such as personal finances. But these differences were also apparent in the category of social skills, which could ostensibly be taught to toddlers.

In terms of teaching specific skills to their children, millennial parents emphasized interpersonal abilities, such as writing a thank-you note and solving conflicts in person. This finding is intriguing because millennials are often criticized for lacking such skills themselves. By contrast, baby boomers were the most likely to have taught their children skills that may soon seem obsolete, such as addressing an envelope.

In many respects, our results support a familiar narrative: Younger people often lack basic practical insights and, therefore, must seek professional help more often than their parents. It's worth noting, however, that findings of this kind could be self-fulfilling. After all, if young adults are inundated with reports of their own incompetence, they may not even attempt to acquire new skills.

Accordingly, if you'd like to expand your repertoire of practical skills, we wish you well in your experimentation. No matter your age, don't be deterred by the prospect of failure. With a little research and some trial and error, you might discover that you're more capable than you imagined.

Of course, DIY isn't always a prudent choice. In many instances, hiring a pro can be more cost-effective and free up time for the things that really matter to you. At HireAHelper, we help customers make that calculation every day. We connect families with reputable and affordable movers, allowing them to assess the costs and benefits for themselves. Whether you're a baby boomer or Gen Zer, we'll make your move remarkably easy – on both your back and wallet.

All data presented in the above study rely on self-reporting, which can be host to issues like telescoping and exaggeration. To combat these issues and only include respondents who took the survey seriously, an attention check was added.

Want to share the altruistic spirit? You're welcome to share this article for noncommercial purposes, just be sure to link back to this page so its contributors can receive proper credit.