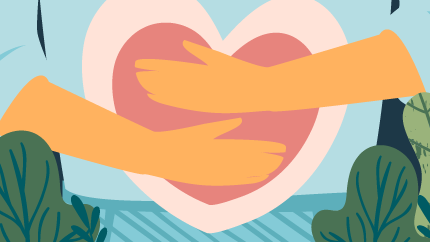 How selfless or altruistic are you? Enough to be considered a good person? What about enough to create lasting and fulfilling relationships, both romantically and platonically? Try as you might, your answer may actually not be enough. Everything from poor listening skills to procrastinating on a Venmo payment may have detrimental ripple effects for you and your loved ones.

But those emotions and repercussions can be difficult to quantify … until now. We asked 991 people across the U.S. to rate both their own selfish behaviors and those of others and then looked at exactly how some of these behaviors impacted their relationships. Read on to find out if your own behaviors may be jeopardizing your connections with some of the most important people in your life.

Altruism appears to improve with age. As respondents got older, their self-reported altruism improved: Baby boomers were the most altruistic of the bunch, followed by Gen Xers and millennials. Though millennials may have been the most selfish of the generations, at least they were honest about it.

Though men and women received nearly the same altruism scores as they reached late adulthood, their paths to getting there were quite different. Women aged 40 to 54 (Gen Xers) essentially hit their peak altruism, with a slight improvement toward maximum altruism as they reached ages 55 to 75 (baby boomers). Men, on the other hand, took much longer to get close to their most altruistic selves, seeing a huge jump in altruism scores from these two age groups. In other words, men took longer to become more altruistic than women did. This may reflect a truth that scientists have already uncovered, explaining that women reach emotional maturity a full 11 years before men, on average.

Baby boomer respondents were also most willing to do helpful things like hold the elevator door (85%), give directions (82%), and donate their clothes to charity (81%). Only 81%, 70%, and 65% of millennials were willing to do the same, respectively.

Selfish behaviors took unfortunate tolls on everything from romance to familial relationships and friendships. In each of these scenarios, there were particular habits that people simply wouldn't tolerate.

The No. 1 most intolerable selfish behavior in a romantic relationship was taking a partner for granted, which 72% of respondents detested. Another 57% couldn't stand the other person always thinking they were right, but only 31% had a problem with the other consistently seeking preferential treatment. With the popularity and highly inclusive examples of self-care, perhaps seeking preferential treatment isn't always such a bad thing in romantic relationships.

Preferential treatment, however, caused more of a problem within families, where 38% took issue with the behavior. Families, however, were generally much more tolerating of selfish behaviors, perhaps because of the inescapable blood relations often involved. Only 50% of respondents found the act of family members always thinking they were right as intolerable, maybe because they simply have no other option than to just get used to it.

Friends, however, were unwilling to be taken for granted, with 61% finding that behavior intolerable within a friendship. Gossiping also caused problems for 42% of friend groups, closely followed by a friend always thinking he or she is right. At almost any age, friendships often do require a certain degree of humility and being able to compromise, so it makes sense that this behavior might not make for a lasting friendship.

Money is often the leading cause of stress in relationships, which of course, can lead to some serious disputes. In fact, 1 in 10 respondents had ended a romantic relationship specifically because of a financial dispute. Not paying a partner back (the No. 1 dispute catalyst) is bad for obvious reasons, but the next most common reason may not truly be one person's fault: having different attitudes on saving and spending. While one partner may have a carefree, live-while-you're-young approach, the other may be more savings-oriented, which can cause serious issues outside of the bank. It's important to communicate openly and honestly with your partner and try to establish your financial priorities early on.

Everyone goes through hard times, and due to a significant event or tragedy, a loved one sometimes needs a loan or a little help with the bills. Unfortunately, when friends and family don't (or choose not to) pay back their debts, it can become hard to look past these grievances.

Close friendships were the most at-risk for financial disputes. Fifteen percent of respondents had dealt with a terminated friendship due to selfish financial behavior. Most often, former friends were guilty of either underpaying a person back or not paying them back at all. Before you lend money to a person you care about, make sure they're trustworthy or you're generous enough to be at peace with your friend simply keeping the money instead of paying you back.

Friends today have few excuses for not paying somebody back, as it's become so easy with a handy app called Venmo. With access to a phone or computer, a person can be paid in an instant … if you have the money and the willpower to do so, that is. Eighty-eight percent of respondents said they would hold it against an acquaintance if they didn't pay the requested Venmo amount, and another 73% would hold this negligence against a close friend. For most, money was even thicker than blood, as 60% of family members would hold a grudge about a withheld Venmo payment request.

Men were four percentage points more likely than women to completely ignore a Venmo request. Though this is a small difference, it may point to the mounting studies that reveal women tend to be more responsible with money as they continue their efforts to close the gender wage gap. Repaying Venmo requests is just one small example of this responsibility.

Since Venmo was such a source of contention for all types of relationships, we dug a little deeper. What exactly were people doing on Venmo that bothered other users of the app the most?

As it turns out, there may be another reason men are more likely to ignore a Venmo request: It doesn't bother them that much if it happens to them. Less than half (40%) of male respondents found it annoying if someone they were dating ignored their Venmo payment request, compared to 53% of women. Women were also reportedly bothered by receiving surprise requests for a shared drink or snack, and again, men were much less perturbed here, letting this bother them only 32% of the time.

The only habit that bothered men and women nearly equally as much was calling the other to remind them to pay up: 30% of men and 31% of women found this annoying. Nevertheless, an in-person reminder to pay was considered forgivable and only bothered 14% of men and 17% of women. Phone calls may be particularly jarring, as they're something modern society does less and less. Perhaps speaking up the next time you see the person would serve as a better reminder.

Ultimately, respondents demonstrated a fairly low bar for being altruistic. Things like paying your loved ones back on Venmo and holding the elevator door could earn you major brownie points. Moreover, the odds say that you'll naturally become more altruistic as you age.

Nevertheless, it's important to continually strive to be better when you can. As they say, sometimes the best thing you can do for others is to work on yourself. And if you need a helping hand in the task, head over to HireAHelper. In a move, they can help you with packing, loading, unloading, and everything in between. Altruism in moving is our specialty.

We used Amazon Mechanical Turk to survey 991 people. Of all respondents, 48% were married; 24% were in a relationship; 19% were single; 8% were divorced; 1% were widowed; and 1% were separated. 52% were women, 48% were men, and less than 1% identified with a nonbinary gender. 41% of respondents were millennials (born 1981 to 1997); 41% were from Generation X (born 1965 to 1980); and 18% were baby boomers (born 1946 to 1964). We excluded the following generations from our study: Generation Z (born 1928 to 1943), the silent generation (born 1928 to 1945), and the greatest generation (born 1927 or earlier). The average age of respondents was 41 years old with a standard deviation of 12 years. To be considered in our data, respondents were required to a) complete all survey questions and b) pass an attention-check question in the middle of the survey. Participants who failed to do either of these were excluded from the study.

In the visualization on altruism scores by age group, we used a validated scale called the Adapted Self-Report Altruism Scale. It consists of 14 items to assess intentions related to altruistic behaviors. Respondents rated themselves from 0 (never) to 4 (very often) on these items. To score each respondent, we summed all item ratings together to get a total score. In the original scale, the scores would range from 0 to 56; however, we converted scores to being on a scale of 0 to 100.

The data have a 7% margin of error for baby boomers and a 5% margin of error for both Generation X and millennials. In any visualizations of quantitative values, such as the average dollar amounts that ended relationships, we only analyzed numbers within the fifth and 95th percentiles of the data.

Want to share the altruistic spirit? You're welcome to share this article for noncommercial purposes, just be sure to link back to this page so its contributors can receive proper credit.